You broke up and suddenly he started to call you regularly, send you gifts and try to talk to you.

Maybe he was the cause of the breakup, but today he is looking for excuses to get closer to you.

Why are guys doing this? Why do they find it so hard to leave you alone, when you can finally be fine without them?

It may be a rhetorical question. Most of the time, if they refuse to leave you alone, it is because they see that you are fine without them.

And this is something to which men are very sensitive.

They can’t accept the idea that you may not NEED them and be happy without them.

They want to feel wanted and sometimes they choose to only torment you out of jealousy and meanness (especially if they learn that you are dating someone).

They turn into psychopaths, unable to control themselves. And that’s where they cross the line.

But there is another explanation.

Some guys refuse to leave you alone, because they still have feelings for you, or because someone has disappointed them and they now realize that you were the right choice.

It’s hard to accept and you have every right to be mad at him.

No one deserves to be a second choice and you should never allow it to come back into your life unless you are 100% sure it has changed. It is there and only there that you can consider the idea of ​​giving it a second chance.

If he writes constantly, pay attention to his language style. Do you think it really could have changed? Do you feel like he really misses him and wants him to get you? If you see it, also pay attention to his body language and read between the lines. This will help you understand why he refuses to leave you alone.

10 surprising reasons why he refuses to leave you alone

Sometimes guys decide to haunt you, just because they feel alone. He shared everything with you when you were together and now finds it difficult to change his “routine”.

He finds himself alone and the first thing he thinks of is writing to you or calling you.

He begins to think that he may have made a mistake in letting you go, but he does not understand that this is only a phase, that it is essential to overcome in order to recover from it. ‘a break.

2. He wants to sleep with you

One of the other reasons why he refuses to leave you alone is that he wants to sleep with you.

Even if you had moved away from each other, it is possible that your s**x life remained fulfilled and that is why the desire is still present.

But you tell yourself that if s**x is the only thing that interests him, he could very well have chosen someone else.

And you are right. He could have chosen to sleep with someone else, but apparently he wants you.

And if you get back together with him, know that nothing will change. You will simply become s**x friends.

Sometimes his behavior, his calls and his daily messages are simply the result of his boredom.

I know it’s hard to understand, but guys can quickly go crazy (especially if they have nothing to do; no hobbies, work, or any other form of entertainment).

It will do so, especially if it sees you having fun without it on social networks. His boredom will be all the more burdensome and he will push him to contact you.

He will send you provocative messages, for the sole purpose of getting upset and because it will be his only source of entertainment.

And if you enter his game and get upset, he will prepare popcorn and settle in to watch you go crazy!

4. He knows you will end up giving him a second chance

He will try to have a second chance, simply because he knows he can make you crack with his beautiful words.

To avoid this, tell them clearly how you feel.

If you don’t want him in your life anymore, let him know.

If necessary, practice a little and I’m sure he will understand the message eventually.

Don’t give him a second chance, just because he knows he can take advantage of it. Let him fight and deserve it.

He may be unable to leave you alone, because he truly misses you.

He misses your way of smiling, your kisses, and even your little arguments.

If he still has business for you and the gifts you gave him, he may miss you even more.

When you are attached to someone, each of the things that belong to him makes us think of him. Getting rid of this feeling is very difficult.

No matter that he tries to fight his urge to write to you, he will fail every time!

At night, it will be the most difficult and if he writes to you every evening to tell you that he misses you and that he cannot fall asleep without you, know that it is the truth.

You sincerely miss this guy and you should consider giving him a second chance.

If he is the one who broke up and they are now trying to contact you all the time and make a subtle apology, that is the ultimate sign of his guilt.

He has a hard time living with this guilt and he will do everything he can to make it up to you.

It doesn’t necessarily mean he wants to get back with you.

Maybe he just wants to get rid of his guilt and so he needs your forgiveness in order to continue his life.

But if you are not ready to forgive him, do not force yourself to make him feel better. No, if necessary, ignore his messages and calls and contact him when you are ready.

Here’s one of the most common reasons why a guy refuses to leave you alone, even if you’ve finally found happiness without him.

He just can’t accept the fact that you’re enjoying life like never before, while his brake is on and waiting for you to notice.

He is consumed by this feeling and he is jealous of things that he had never wanted to do. He then starts calling you and even following you.

It is lost and the fact that you ignore it only makes it worse.

If you suspect him of being jealous, talk to him openly and let him know that you will no longer tolerate this type of behavior in the future.

It is serious and you should never take it lightly.

If he writes to you, calls you, spies on you, sends you gifts, begs you and even begins to threaten you with suicide if you don’t get back together with him, it means that he goes crazy.

When we are in love, our brains produce molecules similar to those found in certain drugs.

These molecules cause us to feel an insane attraction and to have the impression of being incapable of living without said person.

If some people find it difficult to leave you alone, it is because they are still addicted to you.

If he is nice, then suddenly aggressive, there is a serious problem. So you should be careful what you tell him.

Never hesitate to ask your friends and family for help and support. Try not to panic when you are in their company.

It may happen that he refuses to leave you alone, because he wants to play a little with you.

He wants to trap you again, just to tell you that he doesn’t want you anymore.

It is something that men do when their ego has taken a hit, especially if you are the one who broke up.

He will only be kind and gentle to prove to you that he has changed, but believe me, he is not.

His goal is to boost his ego and prove to the rest of the world that he can still conquer you, even though he has no intention of “keeping” you.

You will know that this is the correct explanation if you start to tell yourself: whatever I do, he refuses to leave me alone.

He will not leave you alone until he has satisfied his desire for manipulation.

There are also undecided guys, unable to know if they want to get back with you or leave you alone.

This is why he cannot stop contacting you and tries to initiate conversations, even if you have made it clear that you are no longer interested at all.

When you are undecided, you have no idea what you are doing and because of that, it will send you contradictory signals and will give you the impression of constantly contradicting yourself.

For example, he may tell you that he misses you, then walks away, starts again, and so on.

If he continues to do so, give him an ultimatum and tell him that you will not contact him until he has recovered. 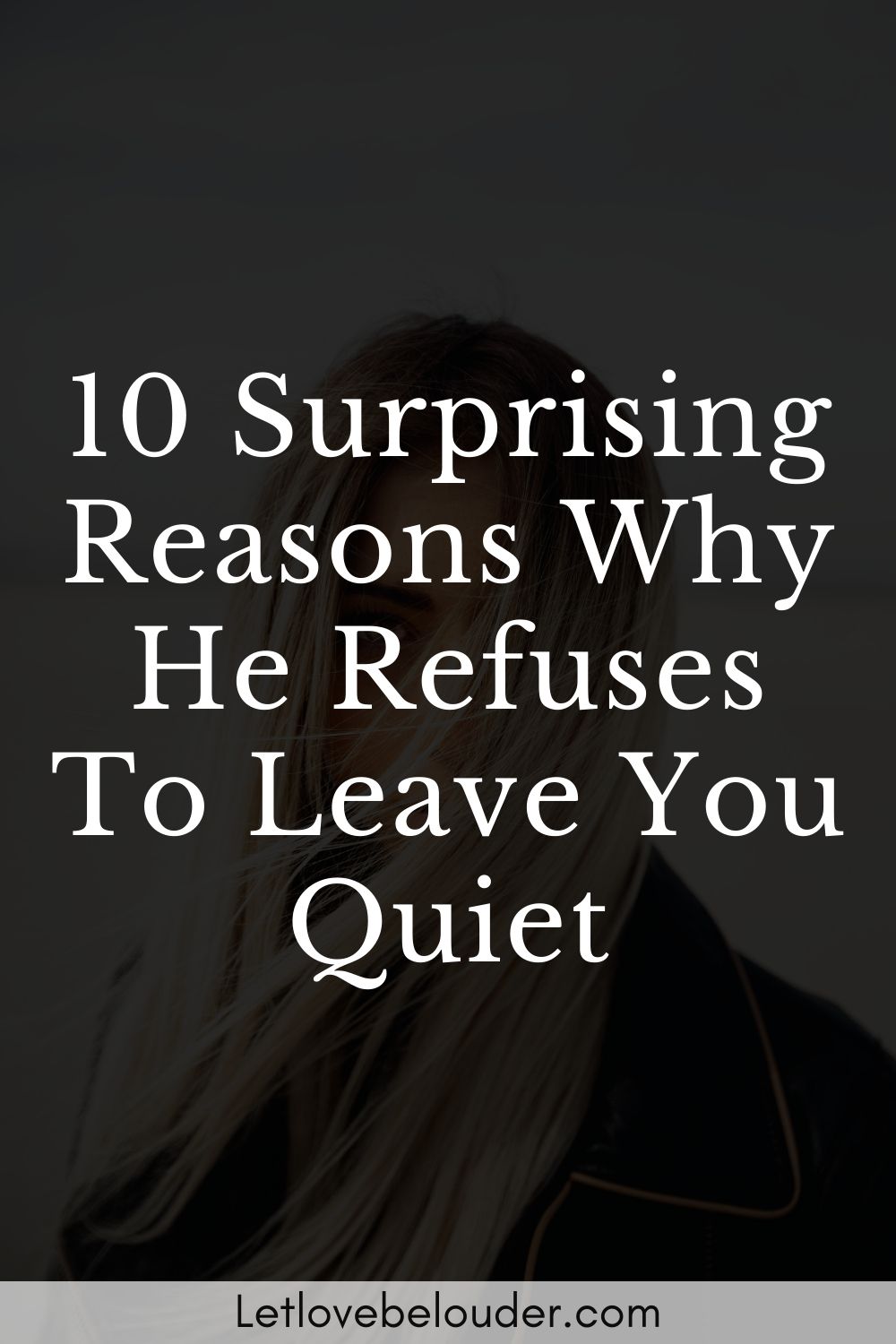