There you are, having another sleepless night thinking about this guy.

What is he doing? Has he thought of you or has he completely forgotten you?

Does he remember all the beautiful moments that you shared? Is he looking at your old photos or listening to songs that remind him of you?

Does he find himself dreaming of you in broad daylight? Does he think of you everyday like you think of him? Does he hope you will come back to him?

Is he ready to give your couple another chance? Is he convinced that this time you will get there?

And then, over these thoughts, you can’t help but wonder if you should call him first.

Should you be the one to put an end to this agony and all these doubts? Because everything would be better than not knowing and asking yourself what he thinks on his side.

After all, maybe he also thinks of you. Maybe at this exact moment, he is lying in his bed and you miss him as much as you miss him.

Maybe he regrets everything he did to you. He may be sorry for all the pain he has inflicted on you and he probably realizes that he made a mistake.

But he is convinced that you can never find the strength to forgive him, so he thinks that it is better to do nothing.

It is clear that he is too proud to take the first step. Or he is afraid that after all that has happened between you, you will reject him.

After all, he’s always been like that – he pretends to be harsh, but deep down, he’s cowardly when it comes to expressing his feelings.

He suppresses his emotions and perhaps he is not himself aware of the fact that he misses you terribly.

B**llsh**t! I’m going to be tough, but the truth is that you don’t miss this guy at all. And chances are he never thought of you again.

He doesn’t remember your birthday, he doesn’t have butterflies in his stomach every time he meets someone who looks like you and he doesn’t look for you in every woman he meets.

So please stop looking for excuses, stop lying, and face the truth.

Because if you missed him, he would act. He would take a step towards you and ask your forgiveness. The rest is just an attempt to blind you.

I know you would do anything for this man to confirm that you still matter to him.

Even if you don’t want to get over it, it’s always nice to know that you miss the person just as much as you do.

But in your case, it’s just not the truth.

This guy has clearly put your relationship on the side of the past, where it belongs and it is high time that you do the same.

So stop thinking about his pride and his ego. Because if you missed him, nothing could stop him from acting.

He would forget his contempt and all of his principles because the love he has for you would be stronger than anything.

If you missed him, he wouldn’t enjoy his single life like he does now.

He would not sleep right to left and would not have replaced you as easily.

If you missed him, he would have found an excuse to get in touch with you for a long time.

He would have made an effort to get closer to you and get back with you for a long time.

If you missed him, he would have gathered all his strength and called you, asking you to come back.

But since you broke up, he hasn’t done anything, has he? He never contacted you and you never heard from him.

So why do you still have hope? Why are you wasting your time dreaming of something that is obviously not in the realm of reality?

Why are you still waiting for something that will never happen?

Why cling to the past when you know that it’s time to forget?

Please, get rid of all memories with this man. Bury all your false hopes, cut the bridges with this past and start living in reality today.

I know that admitting that you don’t count in the eyes of someone you still hold dear is difficult.

But you have to do it. This is the first step you will need to take on the road to recovery. 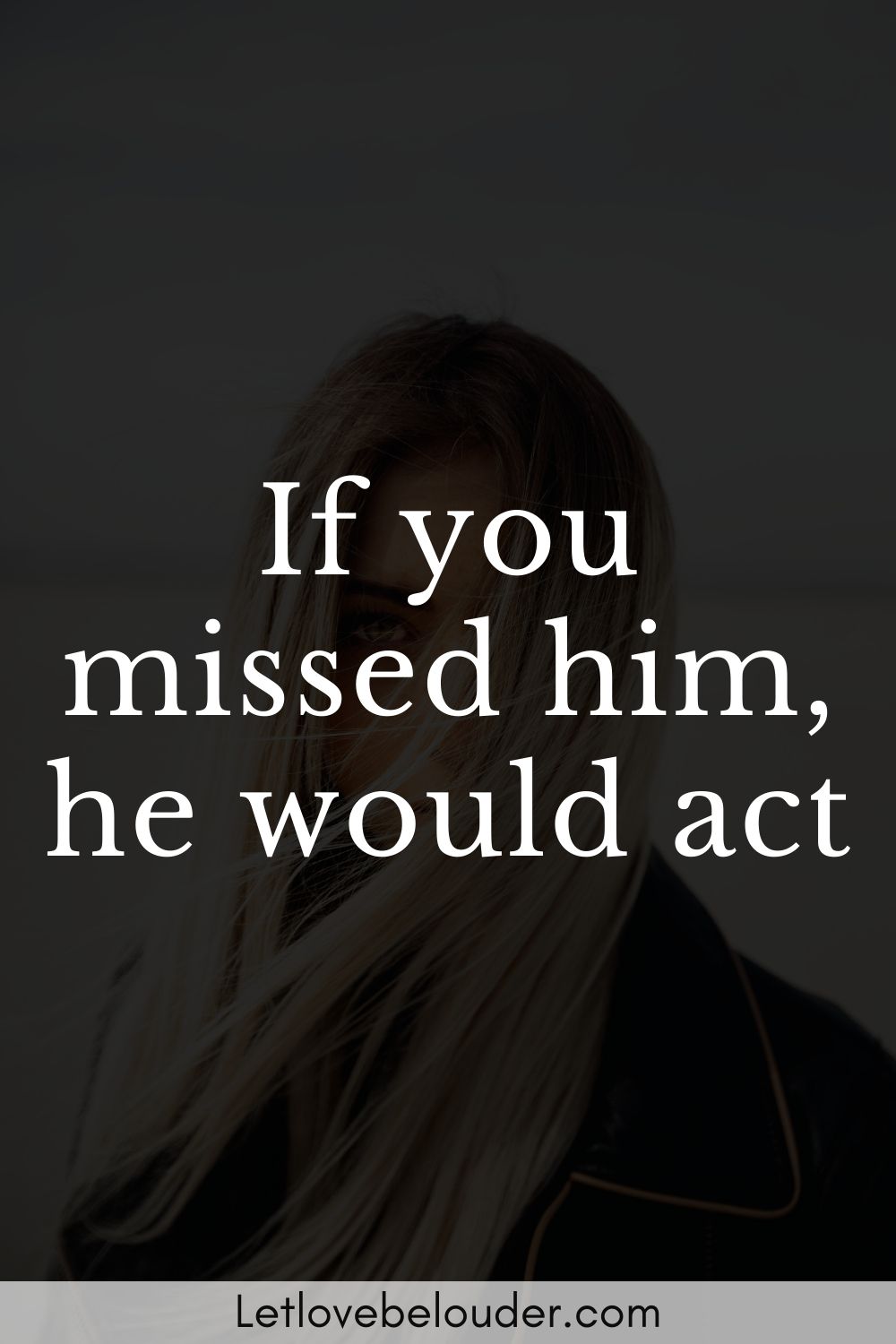