Men will never tell you that they no longer love you right in the eyes.

Especially if they still have feelings for you – not necessarily love, but respect.

Even if they want to move on, they cannot and will not forget the time you spent together so easily.

But there are other signs that could make you think that he could leave you. Everything is in body language.

You can easily see inside someone just how they behave.

Usually women ignore these signs even though they are crystal clear.

No one can happily accept that their marriage or relationship is falling apart.

It is completely normal that when people live in denial because as soon as they accept that things are no longer the same, it means that it is finally over.

Love has many different facets.

If someone tells you they love you, it doesn’t necessarily mean that love will last forever.

This does not necessarily mean that you are “the right one” for him, or vice versa.

It is certain that you surely had something, but it may not have been eternal love. It was probably a craze, a short-term romance that faded over time.

If you stop fooling yourself into thinking that you can save what has been broken for a long time, you may be able to find a way to save yourself from the injury and prepare for the coming rejection.

So be brave and don’t try to avoid the inevitable. Face the situation you find yourself in and face it like the strong woman you are.

If you spot these signs, it means that he no longer loves you by his behavior, save yourself the pain and put an end to it.

It is as if you no longer exist. He completely begins to live his own life.

Before, everything he or you did was a mutual decision. And now you are not even aware of his plans.

When you’re there, it gets weird and pretends to be alone.

Even if he needs something like ironing his shirt, he won’t ask you for it. He will go get it, and if it is not ironed, he will do it alone.

One of the biggest signs that he doesn’t like you anymore is the lack of communication. It’s not like ignoring.

It is much more serious and deeper. When he is no longer interested in you, he will cut himself off from you. He will lose the need to communicate with you in any way.

Then it will be time for you to realize that it is over. No need to try when you can barely speak properly.

Did it happen to you that one way or another, you cannot cross paths while you live in the same apartment?

It is not a coincidence. He has already learned your daily routines and schedules, and he knows when you get home.

So he makes sure he is not there when you arrive.

When a man stops loving you, he will try to avoid you to make you realize that he wants to leave. Spending time together will be very rare.

4. He is not involved in your life

Maybe you did things together before, but not anymore. He suddenly abandoned everything that interests you.

Now, every time you ask him to go out with yourself or your friends, he rejects you. It literally breaks all the ties it has with you.

His words are harsh in private and in public. I mean he really doesn’t choose what he’s going to say.

It’s not even that he doesn’t care about you anymore. But he may be too cowardly to admit that he no longer loves you.

So he uses his words and rude behavior to let you know he wants to leave you.

If you notice that he is doing this and uses “intelligent” comments every time you say or do something, confront him or take it as a wake-up call and just go.

Do you feel like he always finds a way to put you down? Even when you are with your friends or family, he tries to humiliate you by making jokes at your expense.

Others don’t find this so obvious, especially if he’s prone to making jokes, but you just know that it’s something more than a joke – it’s personal.

Try to see if this scenario tells you anything: he gets ready, looks at his phone and smiles, or someone calls him, and he goes into the other room to answer.

Moments later, he’s at the door, grabbing the doorknob, leaving you to wonder where he’s going and with whom.

It is not fair. If you have chosen to live together, you must share everything. Believe me, it’s a sign that he doesn’t love you anymore.

If he doesn’t feel the need to tell you where he’s going just so you don’t worry, then he’s really stopped caring about you.

Could it be worse? No need to say anything more about the lie.

It’s that simple: if he hides things from you, he doesn’t respect you or your relationship, and he probably finds a way to tell you. It’s just that he lacks courage, so he lies.

If he’s texting someone and you’re sitting right next to them, they’ll probably move their phone screen in another direction, so you can’t see them.

And even if you try to invade her privacy a little and get her hands on her phone, it’s impossible.

He will make sure that you never find him because he will be by his side all the time.

Suddenly, he is crazy about you, ready to offer you the moon and another, he acts as if you did not even exist.

It happens because even he is not an emotionless machine. He still has feelings for you.

It is not easy to simply wipe out the existence and the involvement of someone in your life when you decide to go away.

He is probably still struggling with the idea of ​​whether he will leave you or not. That’s why it blows hot and cold.

But if he does, it’s only a matter of time before he leaves you.

11. He gets angry easily

He gets angry at the slightest little thing. Its tolerance level decreases every day, and its fuse is getting shorter and shorter.

He’ll yell at you for no good reason, and he’ll make arguments out of thin air.

In other words, he screams that he can do more!

You’ve stopped being ridiculously cute. But not only that, you stopped talking to yourself and behaving like lovers.

He stopped telling you that he loves you. Even that would not be so important because the actions speak louder than words, but in your case, the actions and words have long since disappeared.

13. He stops making you happy

He doesn’t even try anymore. He completely stopped caring.

14. He compares you to other women

He compares you to any woman he sees on the street, saying that you should be more like her, that you should dress like her or change your hairstyle for something different.

He also compares you to his ex and that’s the part that hurts the most.

Sometimes, during a casual conversation, he will mention it to you in a positive light, which will give you clues that you should follow his example.

No matter if he is wrong, he will never apologize to you, while on the other hand, when you screw up and hurt him, he asks for an apology as soon as possible, otherwise he will sulk all day.

But when he screwed him up, you will never have excuses. He will pretend that nothing has happened.

It’s a clear sign that he doesn’t respect you because he doesn’t care about your feelings which leads to the conclusion that he probably doesn’t love you at all.

16. You are not his priority

It places you at the bottom of its priority list. If he has to choose between something he likes and you, he won’t choose you.

That means he doesn’t love you because a man who loves you would always put you first, no matter what.

If you need his help, your man should drop everything immediately to come and save you if you ask.

17. He doesn’t talk about the future

He never talks about your future together, which means he doesn’t want you.

Maybe, for now, you agree with him and he wants you to be there for whatever reason, but not for very long.

When this happens, you know that the flame that kept your couple alive has disappeared.

So there is no need to force to keep her alive, just let her die. 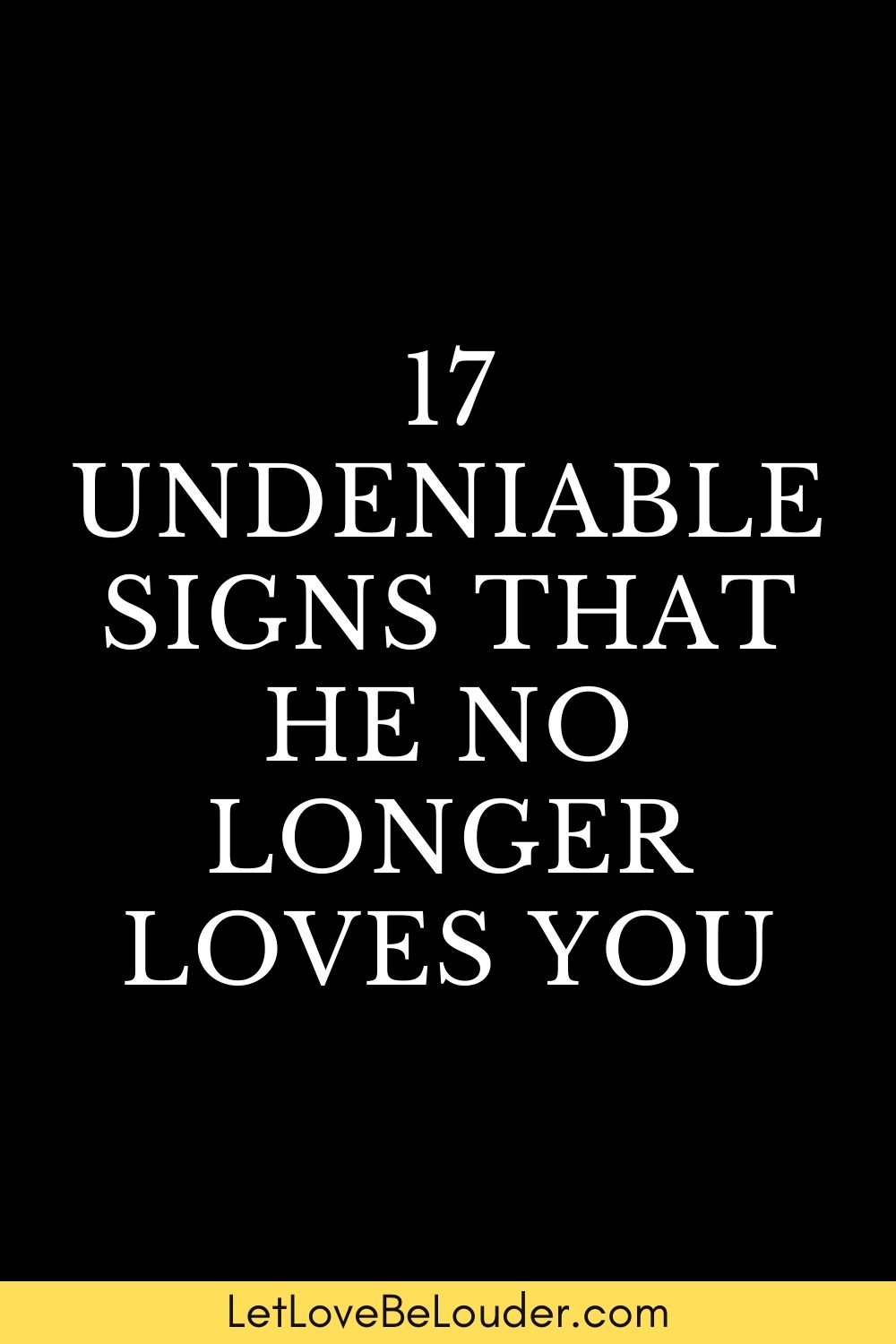