What is he thinking during this period when you have no contact?

Is he thinking of me or has he completely forgotten me to move on?

Is there any chance that we will get back together?

Did I make a mistake by sticking to the zero contact rule?

Let me reassure you and tell you that the zero contact rule was not a mistake but the best thing to do.

All these questions are inevitable and are the result of our broken hearts and our shattered dreams.

They are the result of our pain and our fear of never feeling for someone again, what we feel.

“Far from your eyes, far from your heart” echoes in your mind and you can’t help but imagine the worst-case scenario.

It is for this reason that when someone leaves us, our first instinct pushes us to pursue it, to recover it, to prove that we were made to be together and that our love is worth the fact that we stay and fight.

But that’s exactly what you shouldn’t do. It will only further distance it.

You both need this moment of silence, however harsh it may be.

It allows us to understand where we are and how to face the situation in its entirety. You have to have a cool head and a clear mind.

What we don’t have when we just broke up.

We are unable to think, we are hurt and our emotions are turned upside down.

Not leaving room for breathing after a breakup is the guarantee that things are finished for good.

If you manage to respect the zero contact rule, hold on. It’s easy to fall into the trap of keeping in touch with your ex to maintain a sense of security.

A comforting trap: it will be pleasant to hear it and to keep a certain proximity but it will not make you happy or satisfied, at least not entirely.

It will be a short-term and not very rewarding comfort.

When he decides to leave you again, you will be all the more annihilated.

You must allow yourself time and be determined in your decision to avoid contact with your ex.

However, the questions I mentioned earlier will remain central and your only wish will be to enter his head to find out “what is he thinking about during this period when we have no contact?”

And this is where we want to help you.

He is doomed to think of you because that is always what happens during times when we have no contact with each other.

Here are the thoughts that most commonly cross a guy’s mind during times when we have no contact:

Does he expect you to write to him? He expects you to call him.

He expects you to come knock on his door and ask for an explanation.

He expects sad statutes on Facebook and Instagram stories full of melancholy and serious quotes. Instead, he has only the most complete radio silence.

He is confused but in a good way. He thinks of you and everything that has made you change so much.

He is afraid that you have already forgotten him but he cannot believe it. The less he hears from you, the more he will think of you.

2. He wonders if he misses you, even a little

He used to hear from you and see you frequently and suddenly it’s over.

He can’t help but wonder why. You looked devastated during the breakup and now you don’t even seem to give in to the temptation of messages sent late at night or the desire to find him in bed.

Information flash: she decided that she wanted more than a few messages here and there and occasional legs.

She decided that she couldn’t pretend to be friends with you when she was suffering from your breakup.

She decided to give you a little time so that you could regain your senses and realize how wonderful she is, how precious you had before you screw it up.

It sticks to the zero contact rule until you are ready to invest 100%.

She is tired of receiving only crumbs.

3. He regrets his actions

After he has had to live alone, he will start to miss everything.

He took it all for granted.

The distance forces him to see that what you had was priceless and that if he does not act immediately, you will slip between his fingers.

Often you don’t realize what you had until you’ve lost it, and that’s usually the way it is with men.

After a breakup, they are sad but not wiped out.

4. He fights against his fear of commitment

His feelings are mixed. He wants you but at the same time he is terrified.

It has nothing to do with you but rather the fact that he is not ready for anything in the long term.

He will probably overcome his fears at some point but the question is, will you wait?

The truth is that a commitment phobia can go on and on and only he can do something.

There will come a time when he will have to face his fears at the risk of losing you forever.

His love for you must be greater than the greatest of his fears, otherwise, it is not worth the wait and is not the right one for you.

5. He wonders if you’ve moved on

Do you hang out with someone else? He has had no contact with you and he wonders if there is another man in your life and the fact of not knowing how to kill him slowly.

He is afraid that by breaking up, he will have sent you directly into the arms of another.

Someone else could take his place and everything he previously thought was his.

You don’t do anything that makes him think about it all, his mind is doing it alone and creating all kinds of scenarios.

The contactless period will awaken his jealousy and push him to achieve what he loses.

6. He doesn’t think of you at all because he only thinks of himself

If you have had the misfortune to cross paths with a narcissist, self-centered and manipulative, be sure that his only thoughts will revolve around himself.

He’s the kind of guy with whom the zero contact rule is useful not to get it back but to move on.

The post-breakup pain will be intolerable, despite your attempts to rationalize and the fact that you will be much better without it.

However, the zero contact rule will help you heal because the worst thing you can do is fall back into its web of toxicity.

The recovery process will be long and difficult but will be worth it.

You have missed out on life, taking care to meet its needs and it is time that you think of yourself and rebuild your life.

It is likely that he would like to get back in touch with you, but it will never be because he has changed or because he wants things to be different.

He will want it so that you can have him again and satisfy his unhealthy needs.

He’ll want to see if he can lure you back into his nets again, just so he can break you again.

If you know for sure that the man you were dating was a narcissist or had a poisonous personality, do not break the zero contact rule.

Keep it as far away from you as possible.

I hope these few thoughts have helped you to grasp the big picture and above all to answer the question “what is he thinking during this period when we have no contact?”

I also know that you think that the zero contact rule may not work in the expected direction.

But this is your best chance. Chasing him, allowing him to be with you when he feels alone and when it suits him, supporting him emotionally, sending him messages in a queue or responding to his wobbly messages will not get you anywhere.

You may feel better for a moment, but it won’t last.

But, if he has real feelings for you, the zero contact rule will work wonderfully and he will come back to you.

He will raise mountains and do everything he can to make you part of his life again.

He will realize that leaving you was the biggest mistake of his life.

That is why it is vital that you do not take the first step – let it come to you. He is the one who broke up and it is up to him to repair.

It is up to you to decide how long this contactless period will last.

You need to assess the amount of time you will both need to clear up the situation.

The most important thing is to respect the rule or it will only make things even more difficult.

An even more important step will be to assess the situation if and when it returns after a period of no contact.

You have to know where he got his desire to come back from. You need to know if he returns out of love or out of necessity.

If it is out of love, you will no longer have to worry; he will be forgiven for the sorrow he has imposed on you.

He will try to be the best spouse you have ever had and will be extremely happy after having gone through this difficult and painful period without any contact with you.

Because the latter will have paid and you will finally have the happiness you deserve.

But if it is out of necessity, the reasons for coming back into your life will be completely selfish.

He will only come back to you for the good things and the advantages of being in a relationship and with no intention of fixing things or making efforts.

He will just think that being there is enough.

And in this case, you will be much better without it and therefore you should not let it take up a place in your heart or in your life.

The worst scenario is therefore not that bad. Whether you’ve used zero contact for the purpose of retrieving it and delivering it, you will have wisely used those moments.

One of the most beneficial things about contactless times is being able to focus on yourself.

You are rebuilding your life. You finally make yourself a priority and focus on your dreams and desires.

Once the contactless period ends, you’ll feel like you’re armed with a new look.

You will understand that he was not the only one who needed space – you needed it too.

Do not be surprised if after a period of no contact you realize that you no longer want to be with him.

When you are in a relationship or soon after a breakup, it is difficult to see things in their reality.

Maybe a lot of things were not working, maybe there were things that you had chosen to ignore too many times and now that you are away from him, you realize that he never been the man of your life.

Whatever the outcome and whatever you understand, the zero contact rule will have been worth it because you will undoubtedly have discovered and built up another part of yourself that you will love and cherish more than ever. 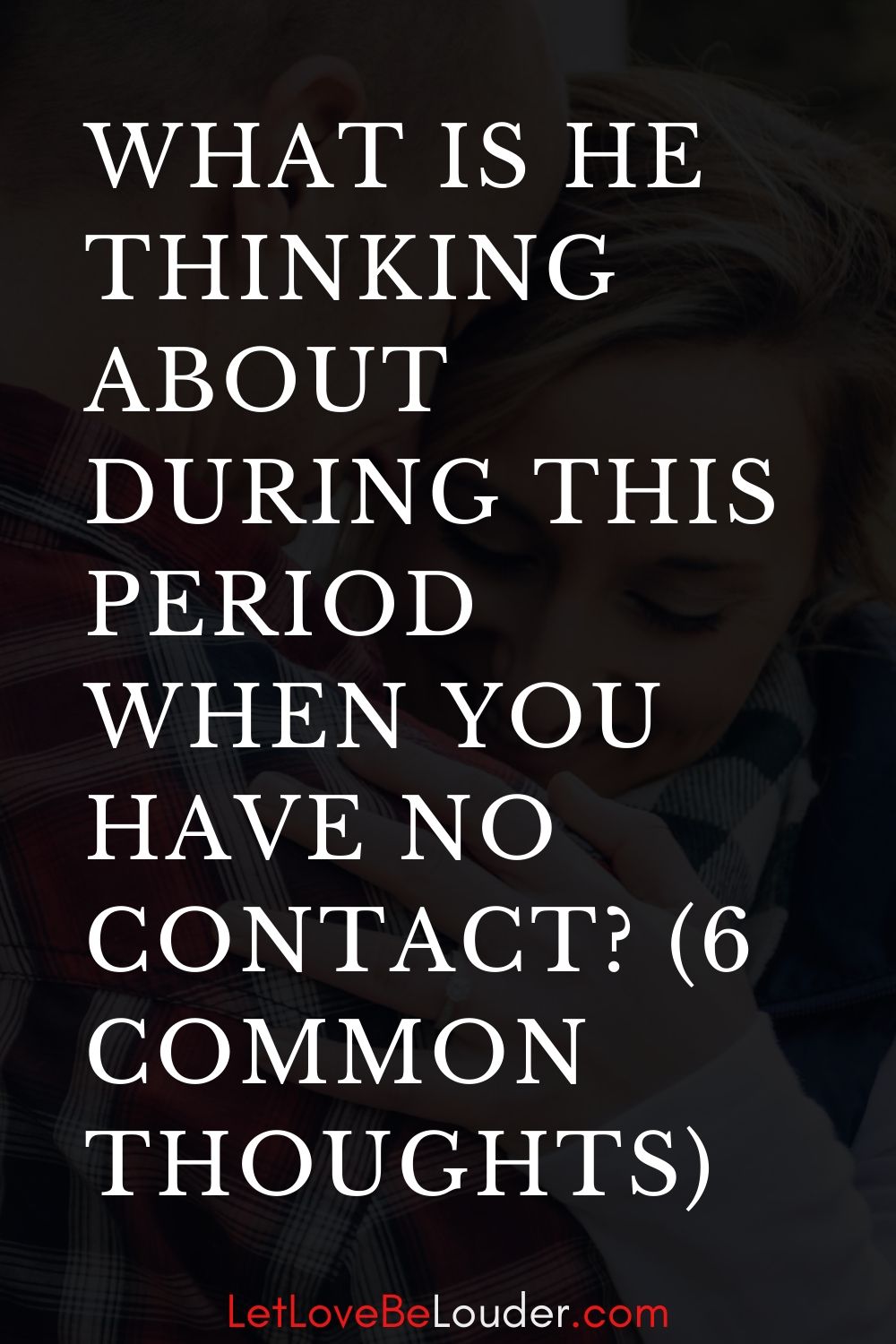