Obviously, you cannot know with certainty if you have an appointment with a psychopath because they are the masters of the disguise. You will never see their colors hidden because they are very good actors.

They can hide their true interior as long as needed.

Years may pass before you realize that this man is actually dangerous and that he is using you emotionally. And often, when we realize it, it is too late, the damage is done and we can no longer avoid the pain. You are already caught in his trap.

People generally think that psychopaths cannot feel any form of love, but that is not true. Usually, they have someone they are extremely attached to. It is their mother or one of their grandparents.

That said, when it comes to romantic relationships, you can be sure that they will have no feelings for you.

Check out some of these traits that a psychopath has and use them as a warning the next time you have a date.

There is no way to get out of a relationship quickly with a psychopath, but there is hope to avoid one if you react in time.

1. They are too charming

There is a difference between people who are naturally charming and those who overdo it. Psychopaths will amaze you with their stories and their charm. Their stories will seem too good to be true.

After talking to them, you will think that you have just met the most perfect person on earth. It should be the first red flag that you’re having a date with a psychopath.

2. They will play with your emotions

They will use nice stories and play with your emotions. They will convince you that they are cute and calm, and that they hate dramas. Afterwards, you will see that the drama is essentially everywhere and always around them, because it is they who cause it.

He will probably also mention his ex, who is a real slut, and that of course, she is still in love with him, but that he will have managed to get away from her in one way or another.

3. Their ego is huge

They are similar to narcissists, but different. Narcissists want to be superior and the best in every situation they find themselves in, while psychopaths want to control everyone.

They want to use others to their advantage and they will never have remorse. In addition, they feel happy when they hurt someone.

4. They always find excuses for their behavior

They are just perfect for distorting reality. Although they will act like fools and hurt you over and over again, they will distort reality and pretend it is your fault.

If you face them with evidence, and try to prove to them that it is not your fault, they will completely ignore it and redirect the conversation in any other direction to try to get away with it. And finally, you will end up arguing over something that has nothing to do with your starting argument.

5. They are born liars

You will be faced with one lie after another. Their lies will be so true and full of details.

They will find a wrong answer to your question in seconds. You will probably have no idea whether they are telling the truth or not.

And if you try to stop them and confront them with their lies, be certain that they will take revenge by hurting you on purpose, because you will have hurt their ego.

They will make you jealous on purpose and seek to provoke you.

Do not be surprised if, when he has given you his full attention, he goes to publish photos with his ex, or if he chats in public with her by making internal jokes just to annoy you. Chaos is his real serenity.

7. They have no guilt

When they do something nasty to someone, they have no remorse or guilt. They don’t know this feeling. The ill-being of others means absolutely nothing to them.

They will continue to do what they want, no matter if it bothers someone. They are only interested in themselves.

If you tell them a story about how someone broke your heart, or something sad happened to you, you won’t have an emotional reaction from a psychopath.

He will try to act emotionally, but you will be able to see through. It will be a false emotion. What they like to do is study how people react to different situations, to try to copy, because they are unable to invoke these emotions on their own.

Overall, you have to be very careful. There is a good chance that you will meet a real psychopath at some point in your life.

Maybe it’s not necessarily someone you’re going out with; it may be a co-worker or a friend’s boyfriend.

On the other hand, if you end up with a psychopath and you are not aware of it, the risk is enormous. You can end up brokenhearted, without money, without shelter and if you are the extremely emotional type, even dead. 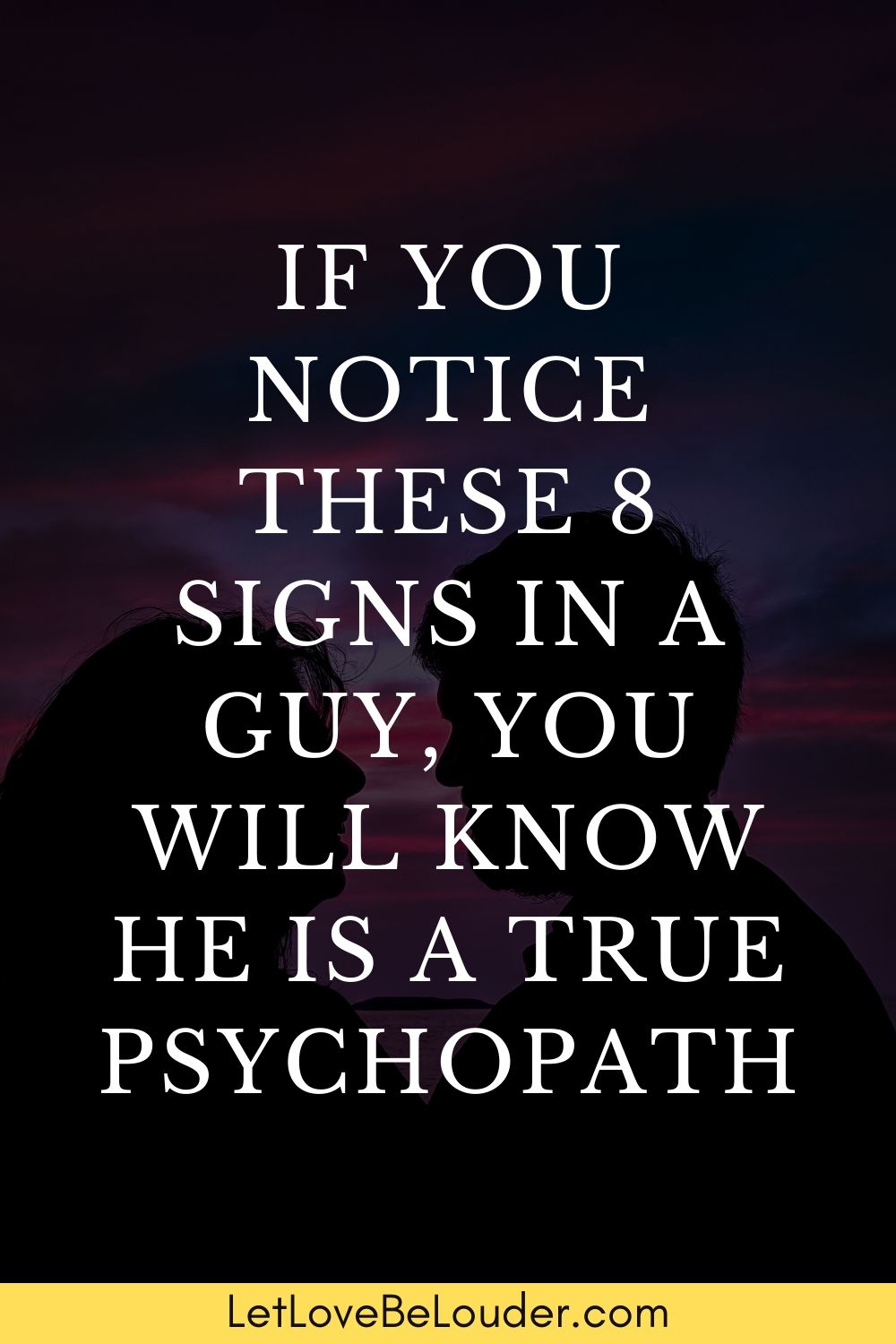