Let’s be honest, we’ve all been there. We fell in love with this perfect guy and everything was fine, until he left us, saying he didn’t feel it or that he wasn’t happy.

And we found ourselves wondering if we could have done something, if there were signs that he was not happy or that he was moving away from us.

And in each of the following relationships, we find ourselves analyzing everything, asking ourselves all the time: is his interest in us decreasing? Well, there are some signs that this may be the case.

1. He’s not as available on the phone as he used to be

He used to send you messages all day and overnight, and you would be on the phone for hours. But recently, you find yourself waiting impatiently for his response, to see none.

You find yourself staring at a black screen, losing hope that it will ever answer you. Suddenly, he is always busy, he forgets his phone, he forgets to answer you or to tell you that everything is fine.

It is one of the first signs that his interest is declining, simply because he no longer wants to be in your company all the time.

At the beginning, he was always there, always there when you needed him, always there to help you and always looking for your support. But now he remains alone, he is independent and he works constantly.

He has deadlines that are impossible to keep, he has to do this or that immediately, he doesn’t think he can be there in due time, etc.

It’s simple, as soon as a person starts to give you pretexts that hardly hold the road, it is simply that they no longer want to do things with you.

3. He doesn’t ask you any more questions

About you, your life or your feelings. Asking questions means that one is interested in the other.

But as soon as the questions stop, it means that we are not interested in what you have to say and that we no longer want to hear from you. You are no longer interested.

4. He is rude and defensive

If the man you know, the one you fell in love with, who was always lovable, considerate and open, becomes cold, rude and defensive, it is a sign that something is wrong with him or with you.

It is a sign simply indicating that his interest in your relationship is decreasing, that he no longer knows how to manage it and that therefore, he becomes distant and cold.

And if as soon as you ask questions or demand answers, he gets on the defensive, it’s because he is not yet aware of the failure of your relationship. He is not aware of the fact that he distances himself and therefore that he harms you.

You made love all the time, you were unable not to touch yourself. You still remember those passionate and wild nights of love.

But your last hug dates back several weeks, as well as the last time you took advantage of each other’s bodies. Lack of privacy is one of the clearest signs that your interest in you is waning; but it can also be a sign indicating a health problem, or at work.

Unless he refuses to admit the existence of a problem and refuses to talk about it, this indicates that his interest has long gone.

6. He no longer notices the little details

He always noticed your hairstyle changes, the new dress you just bought or the new spice you used in the kitchen. He also noticed that you were cold and offered you his jacket.

Now you feel like you could freeze to death next to him, without him even noticing. You feel like a ghost in your own home and in your relationship.

You are there, but he no longer sees you. All he sees are the things that can lead to an argument.

When he makes a decision, whether for a trip, his working hours or the projects he is working on, he no longer takes you or your feelings into account.

He decided to put himself first and no longer include you in his projects, because he is no longer interested in the idea of ​​keeping you. Your feelings no longer interest him and maybe he hopes that by neglecting you, you will leave him and take the role of the bad guy in his place.

8. He does not show any initiative

He used to organize surprise dinners, take you to beautiful restaurants and plan short improvised weekends. But he doesn’t do any of that anymore and you often find yourself admiring him from the back as he leaves the house.

He’s rushing to work, he’s tired all the time and he doesn’t seem to have the slightest desire to go out with you. He was enthusiastic about the movies or concerts you were going to attend together, but he doesn’t mention them anymore, because he doesn’t want to go with you anymore.

You only go out when you decide to. But if it was up to him, you would never leave the house together.

It is something that men often do when their interest in their girlfriend diminishes or when they are planning to break up. The idea is to drive you mad and empty yourself with all these arguments, so that you give up.

These disputes can arise from the smallest thing, such as who will take out the trash, who will pay the last bill or the kind of dress you will wear for this event at work. It’s not these things that really annoy him, but your whole relationship.

But as someone who has always made an effort and who has always ended up broken, I know that it is sometimes better to get away from those who do not appreciate us enough rather than to hope in vain and to end up broken. 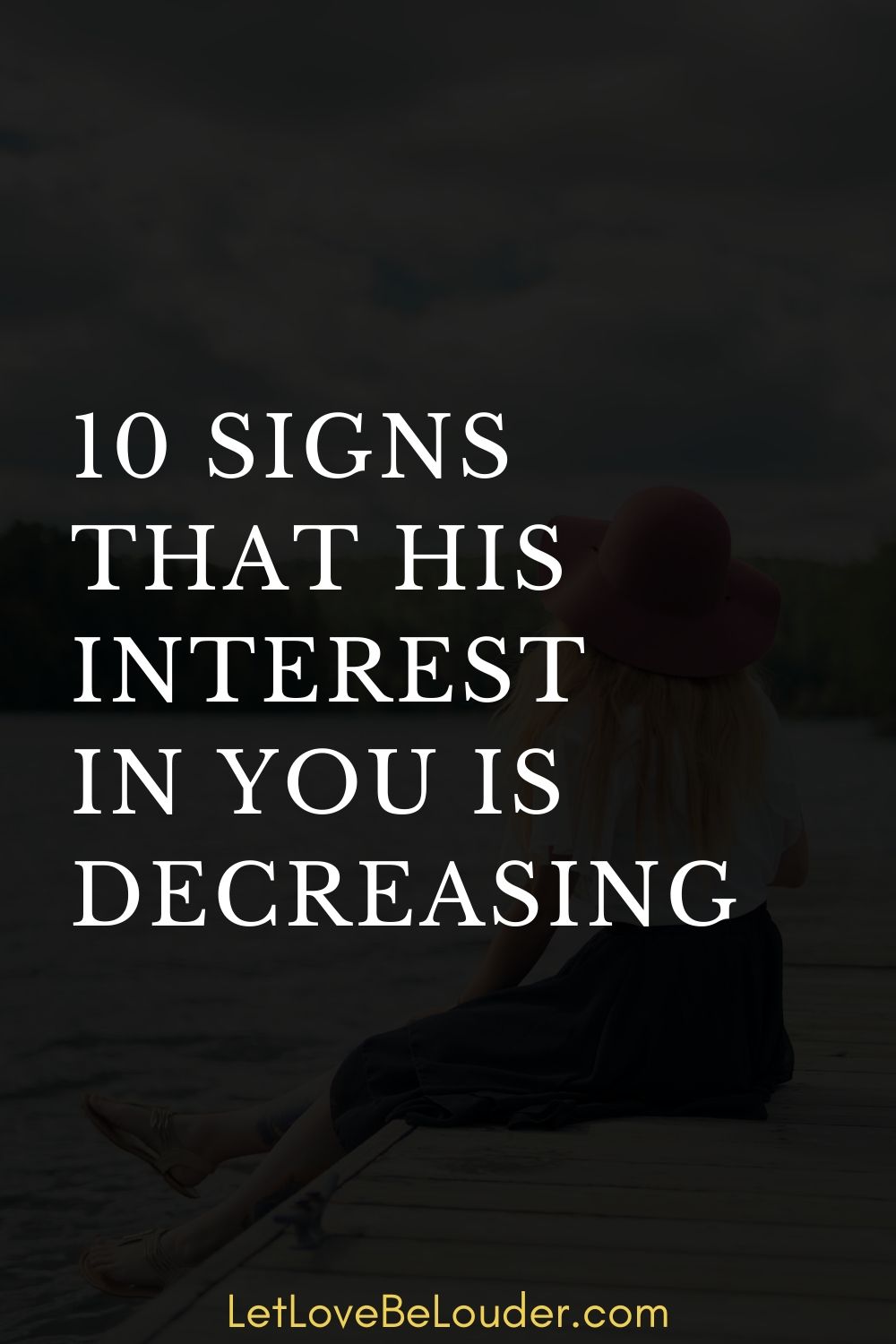