This endless game that tires everyone in the long run except you. The only problem is that you forced a girl who didn’t want to be in your game to participate.

She only wanted you, but it was impossible to have you without all the luggage you carried with you.

She did not enter this “relationship” or whatever name you give her now, so that you can project your insecurities on her.

She didn’t jump into this merry-go-round so you could keep her just close enough to know you exist, but just far enough so she never got too close to you either.

Whenever you saw things getting serious, you went backwards.

It felt like you were there only for the good times and the gossip, but once things ignited, once there was need for real emotions, you fled.

You always got into the habit of disappearing at the most inopportune moment.

When she thought you were finally going to open up and share your feelings, you left her alone, leaving her unanswered for days. As if you disappeared from the face of the earth.

Whenever she was tired of your games or just tired of waiting for you, you would get her back again and the whole ride would start again.

When you saw her doubting or questioning your “relationship”, you brought her back into your little game which usually only led to an impasse. The beautiful words started all over again and you would come up to her whenever you had the opportunity.

You did everything to make sure she got used to having you around again and when things got too serious, you started your good old thing called “save who can”, dropping her and wondering what she did wrong this time.

You knew she could never try with someone else while you were still in the game.

She needed to turn the page or something to tell herself that your story was over. But you never gave her any of that.

You forced her to hang on to you and that’s how you always managed to keep her.

You knew she couldn’t move on until someone said out loud that it was all over.

You never had the opportunity to really try to do it and that’s what kept her so long. You have built a suspense, a tension that promised him great things.

She was your refuge. She was the only one who was always there for you, no matter what. You knew you could count on her, day and night.

It was THE good one, the one everyone hopes to find in their lifetime. But you were too scared to take it to the next level so you dragged it into your poisoned whirlwind.

You know, you may be the greatest player here, but you’re missing something. Because as good as you are at this game of “I flee from you, you follow me”, nothing in your power can stop it once it has decided to cut ties with you.

And while it may seem unrealistic to you, it will.

It won’t take him a long time to see you as you really are. She will see that you are only a player full of promises that you will not keep.

That you only stay when things are not too serious, but that you run away whenever real feelings start to come to the surface.

It won’t take her much longer to realize that there will be someone who will give her everything she deserves and everything you didn’t want to give her.

And that she will realize that there is someone else who will make a real effort and who will be there for her as she was for you.

Don’t bother coming back when she realizes you’re just an immature boy who’s too scared to commit.

Because by the time you realize what you have wasted, all your efforts to recover it will be in vain. Because at this point, she will have found someone who appreciates her as you never did. 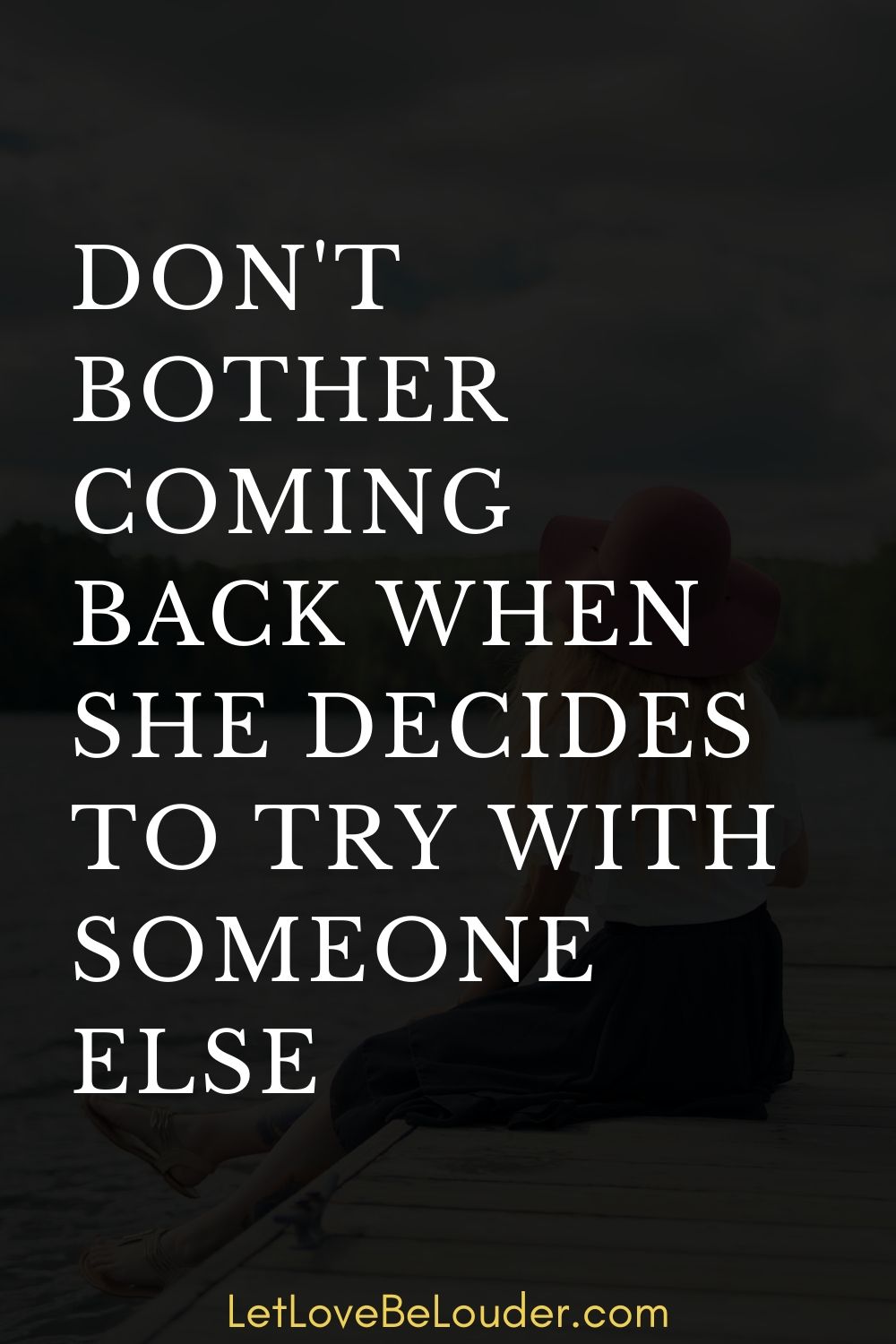