That’s what happened to me, so I know what I’m talking about. I want to share a very painful experience.

I want to open my heart to you and make myself vulnerable before all of you.

I do this in the hope that my story will help others escape from the hell they find themselves in as I escaped from mine.

It took me a long time to understand that I was married to a monster – it took me 4 years. 4 years of tears, 4 years of overwhelming pain, 4 years of thinking it was all my fault.

After all this time, I am no longer the same. He took the part of me that made me who I was.

He stole it from me and turned me into a person I didn’t want to be.

The type of person he wanted me to be. Something he could control – a model disguised as a woman.

It was an endless bastard. A heartless conard. He didn’t care for anyone except himself.

He didn’t care for his family or his friends. In fact, he had no friends.

And he took all of mine too. Everything was so calculated and devious that I didn’t notice it.

I couldn’t leave just like that. Even when I started to understand what he was doing to me, I couldn’t just walk away.

It is not as easy as it seems. I know that sometimes people judge women who are victims of abuse and who nevertheless stay with their executioner.

These abused women even defend their aggressor and find excuses for it.

It is easy to play the role of observer and to judge these women.

However, living this scenario and waking up each morning with your stomach tied with fear and disappointment written on your face is a whole different story.

These women are afraid to leave because they have grown accustomed to the mistreatment they suffer.

They don’t realize it. In an unhealthy and strange way, at some level, it gives them a sense of security, even if it means living with an abusive spouse.

These poisonous men know how to trap you and make you think they care about you.

They know how to give you just enough attention to make you stay.

And when they do, they become toxic sociopaths, that is, they become what they really are and the vicious circle continues.

It is for this reason that you cannot leave. It continues to make you hope it will change.

The only thing these women know about is abuse. When someone yells at you and attacks you every day, it becomes your daily routine. After a while, his cruel insults don’t hurt you as much. Her threats and violent behavior no longer affect you as much. What I mean is that it affects you but you manage to swallow everything. You no longer tremble before him, but you are living in hell inside.

It gives you a dose of itself and you are addicted.

It’s like you’re on drugs. He made you try it a few times and now you can’t do without it.

When an addict decides to drop out, he realizes what he was doing to himself.

He realizes the extent of the damage he has done to his mind and body and he realizes how stupid he was never to have enough.

It’s either giving up on drugs or dying. It’s the same for you. Leave it or die from the inside.

If your gut tells you that something is wrong, if you feel trapped, if your personality starts to fade, or if you have completely disappeared, these are the signs that you are victims of emotional abuse.

All the things I have written are true, but most of the women who live them cannot accept it or are too afraid to do it.

If you are too afraid to “detoxify” yourself, to abandon the sociopath who constantly feeds you with his toxicity, remember this…

Love is not like that. Love is not supposed to yell at you because it was a bad day.

Love is not supposed to break you.

But these men are like a lot except love. They scream, they scream and they disrespect you.

These men do not know how to love. They know how to give you the illusion that they love you.

They use their manipulative power to fool you and make you completely unaware of what’s going on.

They have the power to control you, but only until you wake up from the nightmare they created and realize that you deserve better than what you currently have.

Open your eyes to save yourself. See what he’s doing to you, and, as I did, take your legs to your neck.

1. He makes you “gaslighting” and makes you pass for the madwoman of service

It’s his favorite technique, what he does best. It makes you believe things that are not true.

Even if you doubt him at first and point him out, he will make such powerful and vibrant excuses that the discussion will continue for days.

He’s going to pretend it doesn’t matter. Even if you catch him sending messages to another woman who is clearly his mistress, he will make you believe that this is not true.

Initially, you will insist that he explain himself, but after spending some time listening to the same excuses, you will begin to doubt yourself.

You will end up believing that it is in your head, that you are pushing the plug too far.

It was his departure plan. Make you think you are crazy and that he never did anything wrong.

2. He makes you think it’s all your fault

It makes you feel guilty. He makes you believe that you are the one responsible for everything – his mistakes like yours.

After all, he is perfect and it is impossible that he made a mistake. You, you are just a docile incapacitated, the last one at the bottom of the list.

It’s his way of blackmailing you emotionally.

If he has problems in his life, he will make you feel guilty by saying that you don’t like him or that you don’t give him enough time and that is why he is failing.

Not because he is incompetent, but because you are not trying hard enough.

3. He is a maniac of control

He is obsessed with control. It is for this reason that it isolates you from the world.

He does not want you to communicate with anyone except him, so that he can feed on his toxic thoughts and violent behavior.

So you think there is nothing better for you than what it gives you.

He also knows that he cannot keep your attention forever.

Once you fall in love with him, he knows he has to do something to force you to stay.

To make this possible, he has become a master in the art of controlling all possible situations, so that there are no surprises.

In this way, you feel trapped.

At the start, it will be perfect. He will move mountains for you and you will do the same for him.

But after a while, it will change and get worse and worse. He will deceive you, lie to you, and manipulate you.

He will treat you as if you were his last priority, because in reality that is what you are.

And the most ironic is that you’re supposed to stay perfect and flawless.

You have to watch your behavior, be careful not to hurt it while it treats you like shit.

5. The world revolves around him

It needs to be in the center of attention and everyone has to turn around it.

If you do something that has nothing to do with him, he will be jealous and make you “pay” for this error.

In fact, it has no identity of its own. He needs you to boost his ego and he needs your approval, which is sad when you think about it.

6. He does not respect the limits that you set

Again, it’s because he doesn’t respect you enough to care.

We all have our limits, we put a barrier when something is too much for us. There are things that we tolerate and others that we despise.

He has no respect for it. He thinks he has the right to impose limits for you.

And even if you stay firm and make him understand that enough is enough, he will not respect it.

He’s going to push his limits every time because he doesn’t care what you need or what you think.

He was born like that. Pretty much everything he says is a lie.

He lies so well that you never doubt him and he is constant. He never gets lost in the lies he creates.

Even if you catch him in a lie, he will remain calm and composed. And he will lie to get out of this situation too.

8. He consumes you slowly

It will wear you out and it will absorb all of your energy. And it will continue as long as it needs it.

Even if you are drained and have nothing more to give, it will give you time to recharge your batteries and it will come back to wear you down a little more.

It will infect you with its toxicity and prevent you from seeing how capable, strong and beautiful you are.

Its purpose is to make sure that you are nothing without it.

And for that, he plays different emotional games, just to convince you that he is the only thing you can have.

If he tried to keep you in another way, he would be alone forever.

9. You are overwhelmed by anxiety without knowing why

You feel anxious and you don’t know why. This is because the whole relationship is bad.

He is bad. It is because you do not feel good in this relationship, because you feel that you disrespect and that he is mean for no reason.

You think everything is your fault, and you feel guilty because you have to.

You feel unworthy and you start to think that you are ultimately lucky to have any relationship.

You are anxious because you analyze things that are simple too closely but you cannot realize it.

10. He is very rude to those who have no interest in him

He was kind to you only to impress you. He does not care about others and is pleasant with no one.

On the contrary, it is extremely unpleasant and unpleasant.

Because he doesn’t need these people, he doesn’t hide his real face and he treats them like shit.

When he needs someone’s help, he exudes charm and of course gets what he wants.

Afterwards, you are just another jewel in his crown for him – completely unimportant and non-existent. 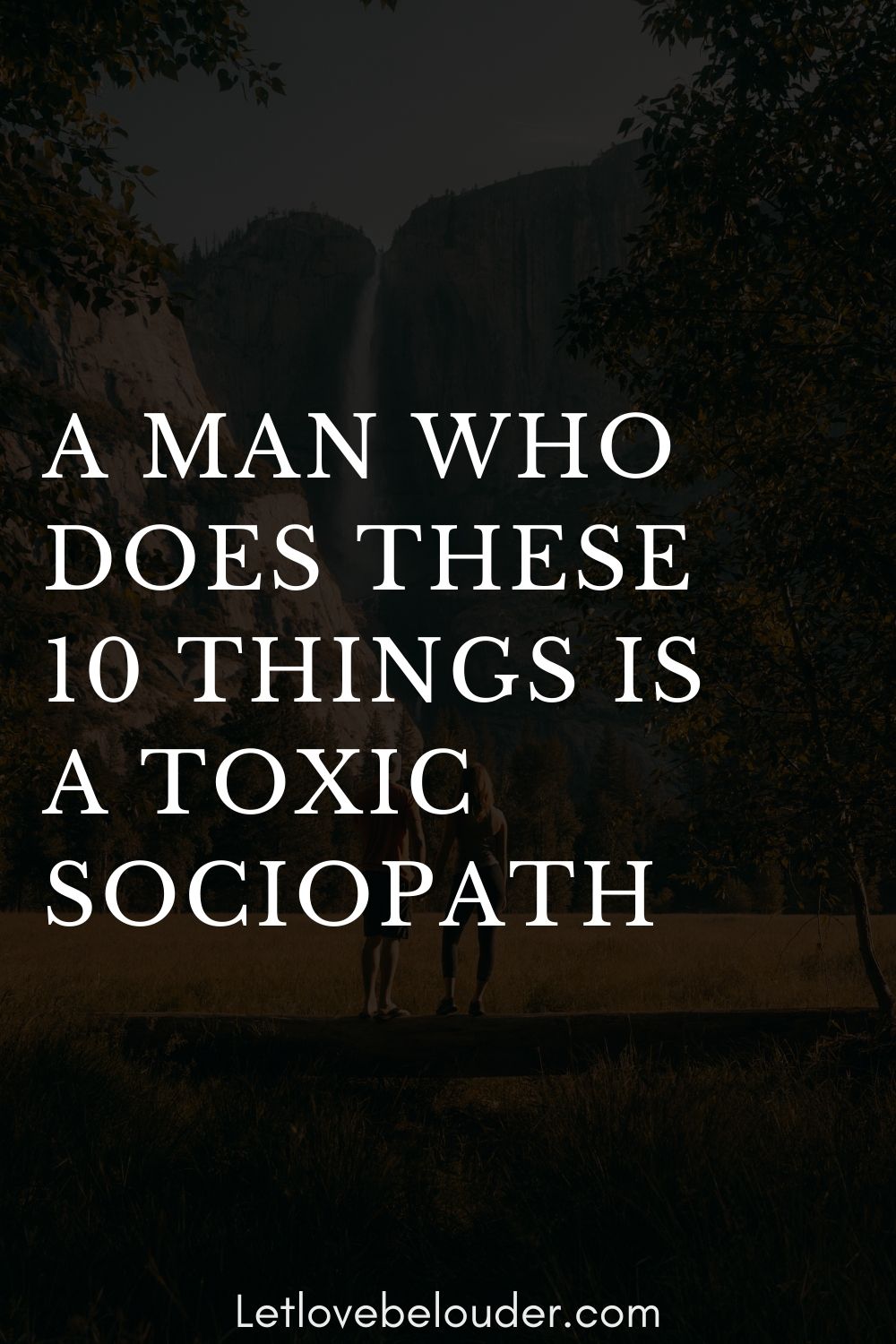