Good girls are everything you dream of in a couple. They are the ones who still believe in love and romance. They love the idea of ​​love and they are the most in the world on love.

We are talking about these girls who stay with the people they love no matter what, those who don’t go away when things get complicated, those who always put others before themselves and those who stay and fight for those they love.

Of those who find hope where no one would have ever thought of looking for it and who stay while the others have already left long ago.

But good girls also have limits. Sometimes, even if it’s something they don’t want to do, they go too. Sometimes, no matter how much they want to stay, they have to go.

Even if they hate to give up, in order to save themselves, they sometimes have to do what no one expected them to do – sometimes good girls go too.

1. Good girls go away when they are taken for granted

They are expected to be always available and always put their lives on hold for others. But it can be exhausting.

Particularly when everything they do is taken for granted. When nobody likes them for what they do but when people get angry when they try to say “no”, it becomes difficult to be good.

Since they hate arguments and cannot really come out of an argument with a toxic person, they go away and show them what it is to be without them.

2. Good girls leave when they realize they’ve been used

When they are constantly taken for granted, when they do all these things for others but no one is there when they need them, their bulbs light up and they finally understand that they have been used for needs others.

It is something that hurts them deep down but instead of letting others hurt them and use them more, they choose to go away.

3. Good girls leave when they understand they have been manipulated

There are people who just wait for the prey to fall into their arms and once that is done, they don’t let go. Once the good girls get lost in the lives of toxic people, they will use them as much as possible.

But the worst part is that they will manipulate them in order to get what they want. And although sometimes it takes time for good girls to realize that they have been manipulated and used to meet someone else’s needs, they will eventually pack their bags and leave.

4. Good girls leave when they find they are last on someone’s priority list

It’s true that good girls will stay longer than anyone else and they will fight for love until their last strength is exhausted but once they realize they are fighting for the wrong person, they will leave.

They will not constantly make someone their priority, if they are in exchange at the bottom of theirs.

When they see the differences in their respective priorities, the only thing you will see is that they go away without looking back.

5. Good girls leave when they are tired of fighting for someone’s attention

They are not the ones who will constantly want to be the center of your attention.

They will not be capricious and they will never be so selfish as to ask you to forget the world and focus only on them. But they will end up getting tired of having to constantly fight for your attention.

If they have to beg you to notice them, it’s because you’re not worth it and once they understand this, they will already have a foothold outside.

6. Good girls leave when they feel like they’re not counting

When the good girls feel like they are no longer counting, they will not fight to prove the contrary, they will leave and give their time to someone who thinks they matter. It’s that simple.

7. Good girls leave when they realize they are the only ones making an effort

What’s the point of giving everything to someone who wouldn’t even lift a finger for you? Well, to be honest – there isn’t one.

If a good girl realizes that she is the only one to make an effort, it will not take her long before arriving at the conclusion that it is better to leave and give it all to someone who will also make efforts in order to build a healthy relationship.

8. Good girls leave when they understand that there is no future

Any normal person would go away as soon as they understand that what is between you is not working or that you have no future.

If you don’t make room for her in your life, if she constantly has to wonder what she means to you, it is a sign that you have no future plans to share with her.

And why would she fight for a place in your future when there is someone who will be more than happy to give her that place, without her having to ask for it?

9. Good Girls Go When Their Efforts Are Not Appreciated

They will do too much and for too long. Even when others would have been gone for a long time, the good girls will stay and fight.

And they will leave knowing that they did everything they could but that it was probably supposed to happen that way.

10. Good girls leave when they don’t get the love they deserve

The biggest fight they will face is whether they should leave those they love. Because sometimes the people they love don’t like them in return.

And sometimes they don’t get the love they deserve. If the loved one of a good girl simply takes her love without ever giving anything back and once she has given all the love she has in her, the only thing she will have to do is to s ‘go.

11. Good girls leave when they have been hurt too much

Sometimes they give all their love to the wrong person. Sometimes all their dreams and hopes are dashed when they understand that this love they give is one way.

And when this happens, they are bound to suffer. When the person they love only brings them pain, when they are constantly stabbed in the heart, when the love they feel only brings them misery, they pack their bags, take their love with them and go away.

12. Good girls leave when they feel like they’re not good enough

In most cases, good girls are aware of their value. They know what they deserve and that they benefit others.

And when your mind and mouth keep telling them they’re not good enough, they’ll go away to save their skin.

It is true that good girls fight like lionesses. It is true that they are the ones that stay the longest and in so doing, they defy all the rules and standards concerning the pain that a human being is able to endure.

But they also see the warning signals and act accordingly. Despite their love, if they are used, manipulated, abused, taken for granted or underestimated, they go away.

And even if this departure is likely to make them suffer a thousand deaths, they will never regret it because they know that they have done everything they could – but for the wrong people, even the best of good girls will not be able do nothing. 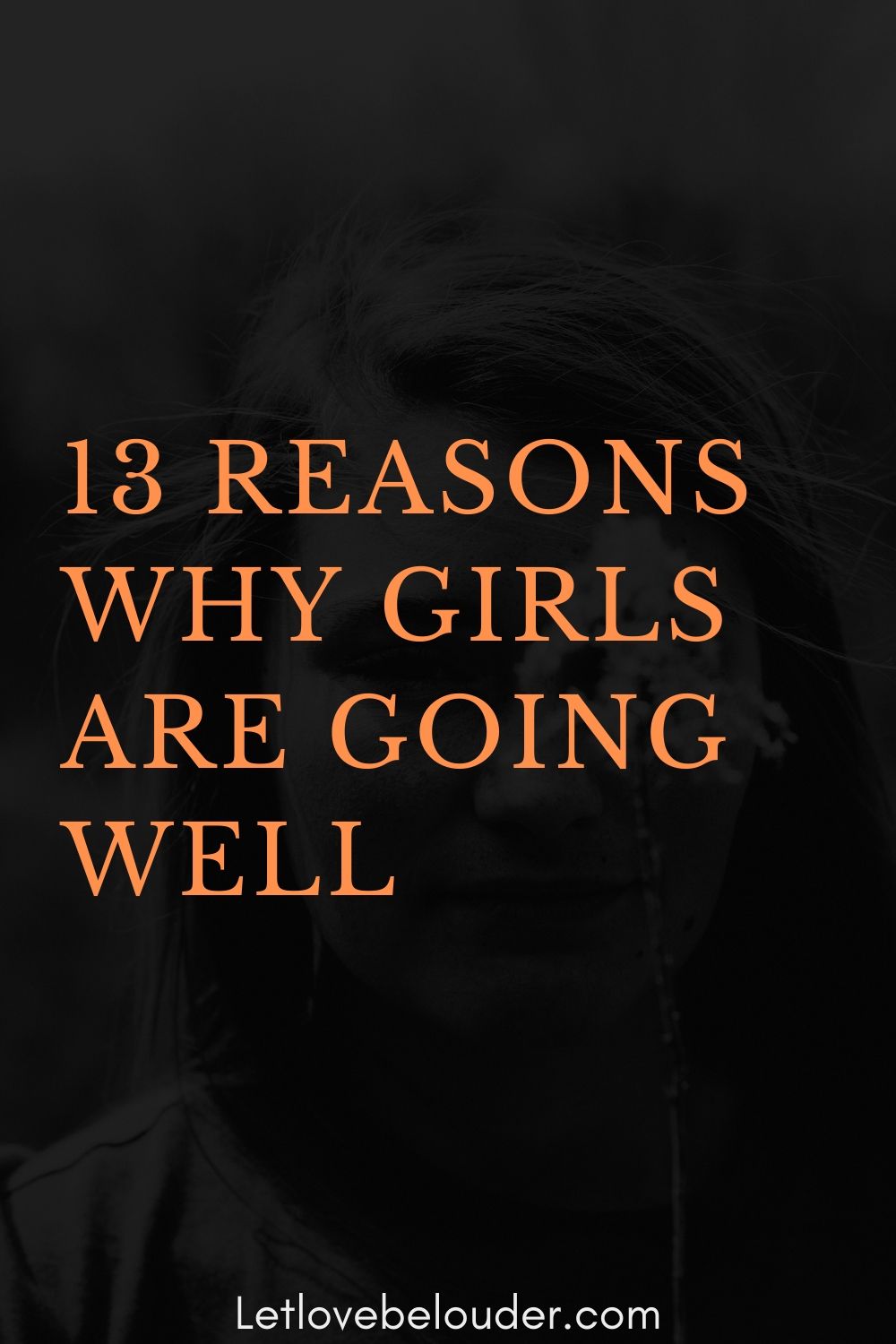