Make her addicted from the first date.

Put in place an effective game of seduction that will drive her madly in love.

However, why precisely want to create lack in a person and precisely in a woman?

Because behind the desire to create lack in a woman, there are in fact very hierarchical and unhealthy elements which are favored by a patriarchal system and by capitalist extension.

Indeed, wondering how to miss him or how to do to miss him is witness to a certain inherited perversity in the way of conceiving the game of seduction as well as the life of couple and in particular in this case probably the life of exclusive couple and heteronorm between a woman and a man.

It is understood that it is positive to create lack in a woman and that it is something to look for.

This vision is very limited and virile.

In this question, there is also no room for alternatives which would suggest creating more equitable relationships favorable to individual and collective freedoms.

Indeed, if one feels the feeling of wanting to create lack in someone, that gives a very good idea of ​​the high degree of imbalance and lack of personal and collective development.

The very unhealthy and toxic elements that are contained in the question “how to create lack in a woman? ”Have on the one hand a strong link with the desire to dominate, to reproduce a specific hierarchy and to exercise a power which is in fact completely illegitimate over a woman or at least over a person who is biopolitically identified or named as such, and on the other hand it has to do with the way of considering and positioning women in relation to themselves.

If you think that wanting to create a lack in a woman is something quite banal as a desire or a goal in itself, you are wrong on the whole.

It really isn’t one of the best ideas out there, either for you or for the person you’re targeting.

Behind this desire hides power issues, both personal and collective, which interact with each other while nourishing each other.

Without forgetting that the girls are not fooled and consider them and treat them as they are for example in the wobbly and doubtful articles of Alexandre Cormont does not make you neither men of value nor quite simply people of value.

Far from there. The beginning of a relationship deserves much better as a framework than that of a man’s desire to create a lack in a woman.

Any relationship should be built on good foundations that are devoid of toxic domination and submission.

The will to dominate, a story of virility

To want to create a lack in a woman is in fact to want to possess it, if not completely, at least in part.

It is to want it to belong to you.

It’s the urge to constantly haunt your thoughts and take up space in your schedule, both physically and mentally, and take over your private life in a toxic manner.

This desire to dominate men often over women is in fact unconscious.

It is expressed in multiple ways. It is a reflex that is learned or acquired.

It is a perpetuation of a manly system dating back thousands of years.

Indeed, the traces of virility are found in the desire to invade the other and to gain the upper hand over him or her by all means.

It is a weapon which dates from the dawn of time and which allows to take power and dominate.

A well-known strategy is, for example, to keep a cool head and calculate your response time when the one you want to create sends you a good night message.

Many believe that it is out of the question to respond immediately and that it is better to wait a little before sending a response message.

It is typically a strategy of developing an unbalanced relationship in which you want to somehow be strong, independent, playmaker and ultimately prove something to yourself.

What all this hides is a great weakness and a relationship doomed to break up in love.

In addition, this manly will contains a good deal of inconsistency, dishonesty and a twisted conception of relationships.

Furthermore, from a more personal point of view, wanting to know how to miss him seems to indicate that there is a problem of self-confidence somewhere.

Lack of self-confidence and trust in others

Wanting to create a lack in a woman is in fact a reflection of the lack of self-confidence.

We make ourselves weak, threatened, in danger and we need to prove to the other as well as to ourselves the opposite.

However, this is not a solution. Confidence in oneself and in the other does not develop by imposing on the other his power.

Power has nothing to do nor in personal development.

Power has nothing to do with love.

Because love is in itself a power.

Self-confidence doesn’t come from receiving hundreds of likes on social media either.

It is only through real practice and the development of self-confidence that one can love and be loved, that is to say, create healthy and balanced human relationships.

Women are above all human beings

In addition, in the question “how to create lack in a woman”, there is the word “woman” which refers in our society to a human being of female biological s**x.

This word comes from the Greek which means “that which is born” then which derives in Latin to give a word which refers to the fetus.

Etymologically, the woman would be the human and social being who would have the capacity to give birth.

It is not by chance that it is precisely in this individual that we want to create a feeling of lack.

The human and social power of women is in fact very great.

The power to give birth is a great power.

It is a power that scares manhood.

Hence the feeling of threat felt by some men and in this case the desire to create lack in women.

However, being a woman is better than the biological fact of giving birth because not all women give birth.

As Simone de Beauvoir very formulated it in her founding work The Second S**x: “you are not born a woman, you become one”.

It is a purely binary and simplifying biopolitical construction.

The dominating tendencies of men are a directly visible result of this biopolitical construction.

The real intention behind the desire to create lack in a woman is to perpetuate her condition as a woman as it was decided by the patriarchal and capitalist system.

Why not refuse to walk on the compulsory fields to join other freer fields which promote equity and the health of human relationships and avoid the harmfulness and toxicity of hierarchical behavior?

The risks of wanting to create a lack in a woman

Women are therefore above all human beings. It will never be too written or repeated too much.

Like all human beings and all living beings, they are intelligent creatures of nature and behavior

Acting in order to want to create a lack in a woman can simply result in disgust in this woman in question.

She may no longer want to have you in her life and she will simply be silent on the radio.

And it will be all the better, as much for her as for you because it will save you from a relationship based on power issues, issues of self-confidence and in the other.

There is nothing more repulsive to a woman than a cheating man.

The indicator of interest in a person is far from the desire to create a lack in a person.

A healthy relationship is certainly not based on a biased strategy which would consist in playing a game of seduction setting up a dominant-dominated relationship.

This is not to say that people involved in a relationship cannot play the dominant-dominated game.

Indeed, it would be much healthier for the dominant-dominated game to be set up with all the rules necessary for the establishment of a safe space.

How to create healthy relationships?

Sincerity and honesty are practiced first of all with oneself.

And that is the condition for being able to be sincere and honest with others.

So that not being in harmony with oneself makes relationships difficult to harmonize and therefore healthy.

Equity is an exercise in deconstruction which consists in not taking the system and the hierarchies in place as such but on the contrary to reflect on the way in which individuals are categorized and treated socially and politically.

Thus, criticizing, among other things, the biopolitical categories allows us to expect fair thinking.

However, we are all deeply marked by these categories which settle comfortably long before our birth.

In addition, trust in yourself and in the other is a key to creating healthy relationships.

Changes on a collective scale take place in changes on an individual scale.

Acquiring the necessary confidence in yourself and in the other, trusting yourself and trusting others is the ingredient without which the relational recipe cannot be realized.

Finally, freedom comes precisely from the practice of sincerity, honesty, self-confidence and fairness.

To be free and to be in free relationships is to be able to confidently remain sincere, honest and fair.

Rather than asking the question: “how to create lack in a woman? “, It is much more relevant to ask yourself:” how to create healthy relationships with others? ”

The question differently formulated: ”how to foster beautiful connections with others? “.

In short, forget the two-ball techniques of calculating each stroke to manipulate the other.

No to little planned attentions, no to kisses that are not sincere, no to sweet little words that are performed!

To want to create lack in a woman is to want to create a scenario implying a virile heteros**xual man who would come, like a hero or a prince charming, to save the poor woman from a lack.

It is a pure illusion, a ridiculous staging which is in fact a real love-killer.

There is additionally miss and miss.

It goes without saying that when we sincerely love a person and that we are in his absence, without a doubt, we miss that person and sometimes terribly.

But this lack is a healthy lack, it is in no way unhealthy or can in no way prevent it from functioning in its daily life, it is not an addiction or an addiction.

This question is also strongly linked to the identity of the heteros**xual and virile man par excellence.

Criticizing this question and doing reflective work on it also means criticizing its identity and determining whether it is worth keeping intact.

Now is the time to understand your identity and retrace its formation. It’s time to

Don’t be afraid for your identity! It will only evolve for the better.

The question ”how to create lack in a woman? ”Is to be dissected.

This is a question which unfortunately contains many harmful and reproductive elements of the both patriarchal and capitalist system.

If we want to build relationships that hold water and in which we really flourish, it is inevitable to abolish the hierarchical elements that inhibit the freedoms of each and everyone and the possibility of equity.

Ask yourself ”how to create a lack in a woman? ”Is counterproductive for your personal development and that of others. The result will be disastrous.

The toxic elements that are at the origin of the question ”how to miss it? ”Can be sanitized by focusing on universal values ​​such as sincerity, honesty, sharing, confidence in oneself, and in others, equity.

All this, to shape the bases of free relationships and free identities. 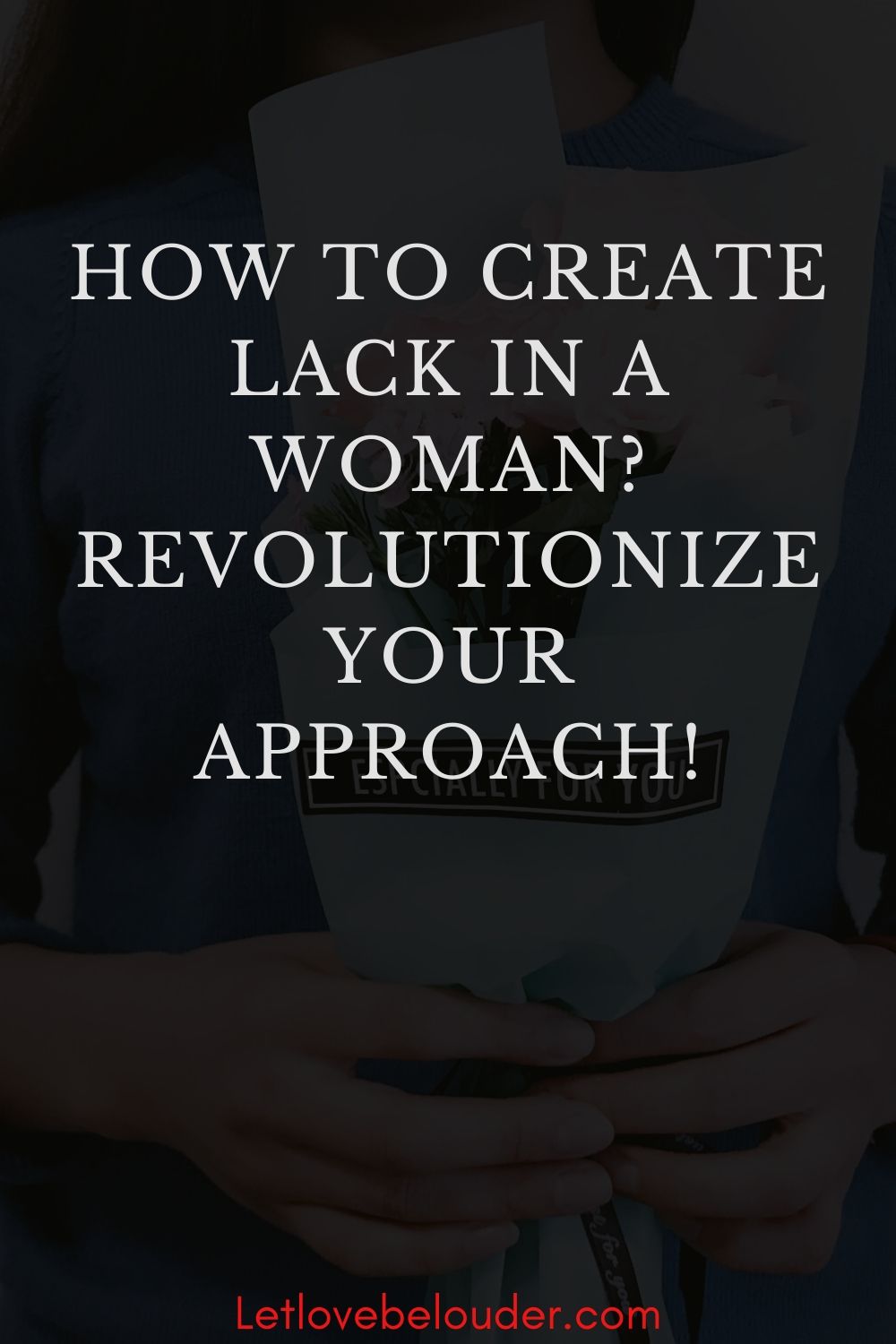