Everything you need to know to recognize a manipulative woman

When we talk about manipulation, we most often imagine a perverse narcissistic manipulator man, that is to say, we link this notion to the masculine gender.

We forget that women too can become very good manipulators.

Women can be really cruel, and these days it is becoming easier for a man to fall under the influence of a narcissistic perverse woman, even if men do not necessarily seek this kind of woman.

How to recognize a perverse manipulative woman?

Why does a woman need to play with a man and with his feelings?

Why being with such a woman makes your relationship toxic?

How to react when you recognize it?

You will also be told why being with a woman who likes manipulation is not good for your relationship and how it can slow down your personal development.

Then we will help you to know everything you need to avoid it! Learn how to easily detect and be attacked by a manipulative woman.

Learn not to fall under its influence!

How do you define manipulation?

Manipulation is defined as an action of subjecting something or someone to various operations.

It is a power to guide someone in the direction you want and without them realizing it.

Manipulation in a romantic relationship can seriously affect your married life.

It is for this reason that you must know how to recognize it, and what is even more important, you must be a man who will avoid manipulative women as soon as possible.

The manipulative woman – the definition

How to qualify a perverse manipulative woman?

In most cases, women are caught in a narcissistic universe of which they are not aware.

And in this case, they have certain specific characteristics such as the desire to play with a man, to lie, they are unfaithful, etc.

This will be discussed in the following parts of the text.

But first, we give you some definitions of this notion:

– The manipulative women are generally good liars who do not hesitate to play with feelings of their partner. By manipulating with him, they know very well what they are doing, they are aware of all their steps.

– They know very well that their manipulation can harm their spouse.

– We can, perhaps, find the origin of their behavior in their previous relationships. They were often the victims of a narcissistic, perverse manipulative man, and now they are taking revenge.

– Meeting a manipulator can explain their desire to always have control.

– When manipulating a man, these women need to protect themselves, control their partner and hide their lack of self-confidence.

How does a narcissistic manipulator woman behave?

“ The narcissistic pervert tries to push his victim to act against him and then denounce him as bad. What matters is that the victim appears responsible for what happens to him. ”MF Hirigoyen

A woman starts to manipulate even if she is aware of what she is doing. She finds a certain pleasure in the suffering of the other.

His first goal is to make man feel guilty for all things.

She uses manipulation to get what she wants: money, attention, s**x, power. Manipulation is his tool for controlling a man.

And it is exactly the need to control every movement that hurts men the most, and what drives them to seek help.

A manipulative woman does not want above all to pass for a “weak woman”, she has a great desire to express the force, to be superior compared to her man.

As we have already said, a woman who starts to manipulate a man, she has often been the victim of a manipulator.

She no longer wants to relive this experience, and manipulation is like a kind of revenge. It’s a way to protect yourself.

Her bad experiences from the past make her think that all men are bad, the same.

And even if a woman is not naturally a manipulator, she became it because of the assholes with which she had a relation.

Most women become the manipulators to show the man what it’s like to be a victim of manipulation.

And this is not an excuse, it does not allow women to behave this way. No man should be the victim of their past!

Women manipulators are aware of each movement, they know very well what they are doing.

First, they are busy seducing the man they like, making him madly in love, bringing them to their knees.

They are sometimes ready to present themselves as another woman, the one with the soft and pleasant character, and to hide their need for manipulation, to better seduce a man.

After having firmly attached a man to her, the manipulative woman can better control him and make him come back no matter what his behavior is.

The most obvious behavior of a manipulative woman:

1. She demeans others to feel superior.

For the most part, she looks for a man’s weak spots, and she points them out and insists on them. This allows him to feel superior compared to his partner.

She can do it in a subtle way, almost unnoticed, but after a while her intentions always end up being discovered.

2. The woman who manipulates blames her for always blaming her partner.

She always has something to blame him for. She can make you think it’s always your fault.

His narcissistic perversion has become famous and unbearable for the people around him. She has few friends, but the man she is dating has become her new victim.

4. She never questions herself.

She has several toxic relationships, with her partner and with her friends, she is aware of it, but she never questions herself. She has a lack of confidence and she is afraid to face it.

5. It has the power to control the loved man.

She has the gift of making him feel weak and completely controlling his behavior. She has the power to get anything she wants from him.

She takes control of her partner’s life, isolating him from his friends, family, colleagues.

6. She wants her partner to become completely dependent on her.

It doesn’t matter if it’s financial, s**xual, spiritual dependence. She wants to own it, she wants it to belong only to her. Like that, she can handle with him more easily.

7. She is able to divert her s**xuality into a power game.

She knows how to handle her s**xuality very well and she uses it to feel superior, and to create dependence in her partner.

8. She has exaggerated mood swings.

She accuses her partner for her mood swings. Sometimes a man knows very well that this woman manipulates with him, but she has the power to change her behavior so much, to disguise herself as a perfect woman, to make him forget his manipulations.

9. She produces unpleasant feelings in her partner.

She attacks him, criticizes him, she makes fun of him, she devalues ​​him.

She stresses him, she makes him uncomfortable, she discourages him. This man is not happy by his side.

She only talks about herself and is not interested in others.

11. A perverse manipulative woman lies, she is jealous, calculating, unfaithful.

She behaves this way because she has a lack of esteem and confidence.

12. She takes pleasure in making her partner suffer.

Although it is impossible for most people to hurt someone, the manipulative woman has fun doing it. She has fun making the man she loves suffer.

What feelings can a manipulative woman produce in a man?

When in a relationship with a perverse manipulative woman, a man can feel very bad. Here is a list of feelings that this toxic relationship produces in men:

1. He is angry, exasperated, irritated, lost.

2. It is not respected and stuck.

3. He says yes, even if sometimes he means no.

4. He can never say what he thinks.

5. He has an attitude, behaviors that are unlike him.

7. He feels that she is laughing at him.

8. He feels accused of things he has not done.

9. He feels accused of things she has done herself.

12. He would like to move away, get out of this relationship, but she catches up with him.

13. He seems to be saying bad things about him behind his back.

14. He wants to tell his loved ones what is going on in their relationship, but he has no opportunity.

15. He can’t stop thinking about it, he feels obsessed with this woman.

Here are the statements of men victims of a toxic relationship:

1. I don’t know what I want, I’m lost. I don’t feel in control of myself, my decisions, my thoughts. I think I need help.

2. I have lost my self-esteem. I know the only solution is to get out of this relationship, but I can’t.

3. I am ashamed of what is happening to me, but I am afraid to talk about it.

4. I feel in total imbalance with myself.

6. I feel alone, isolated, I have moved away from my loved ones.

7. Sometimes I want to kill this woman!

8. I can’t understand why I’m hanging on to this person.

9. I’m obsessed, I think about it all the time, I got used to his presence in my life.

How to fight against a woman who manipulates with you?

When you are struggling with a woman who uses manipulation, the first thing is to be aware of it.

Narcissistic perverted women are very persistent, they change manipulation techniques, they are ready to do anything to keep their victim in the grips of manipulation.

Many men realize this manipulation too late, when they are exhausted.

Hence the need to write this text to help them recognize this kind of women and get rid of them as quickly as possible.

To get out of it, stop feeling guilty, because the strength of a manipulative woman hides in the need to condemn you for everything you can imagine.

Stop making excuses for things for which you are not responsible.

Stop thinking she is a good woman for you, restore your confidence.

Rebuild morale, work on your personality. Develop a long-term strategy to get rid of this person.

It is not easy to do it, it is even less easy to become a man who does not allow himself to be done.

But the pleasure you can feel in getting rid of a manipulative woman and getting out of this toxic relationship is extraordinary, it cannot be paid for with all the money in the world! 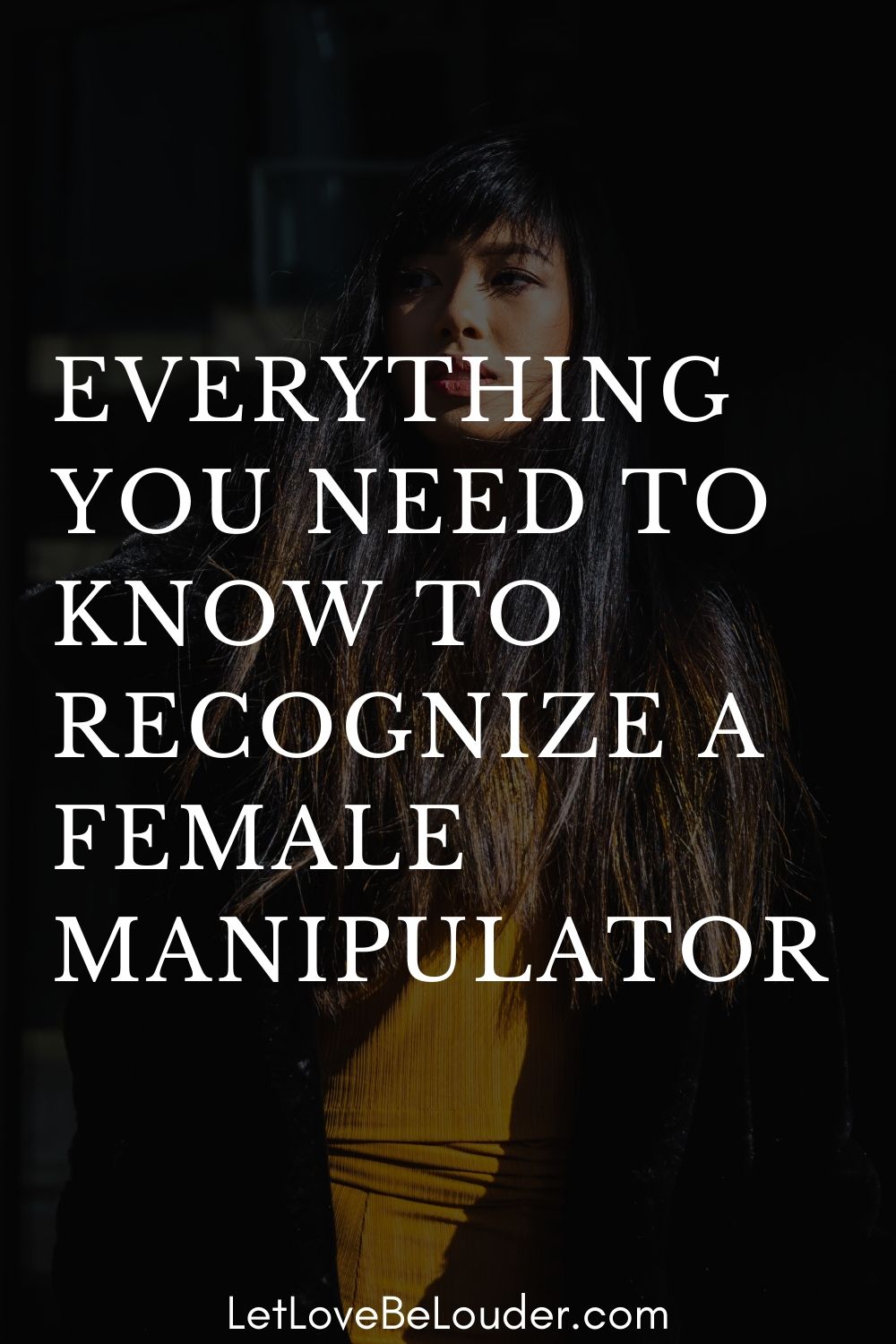