Social mores have always had an impact on the development of romantic relationships and the values ​​attributed to them. Thus, there was a time when men took great pride in conquering the heart of their beautiful and in offering them a respectable life within which they were committed to providing for their needs.

Today, customs are very different. And although there are still men who wish to find the woman of their life, to seduce her, to marry her and to cherish her until their death, there is a happy band of them who values ​​their celibacy and their freedom as the apple of their eyes. and who absolutely do not want to engage in any way that could jeopardize their way of life.

Of course, they don’t become sober monks. Rather, they prefer the role of “modern friend” – better known in English as “friend with benefits”.

But these fierce men who don’t want to get involved, is there a way to make them change?

What is there to expect from them?

We must first see what is behind this attitude. Is it a shell linked to a defense mechanism to avoid being injured or the consequence of certain egocentricity?

By egocentricity, we mean avoiding the relationship because it is easier to stay single; boycott of the compromises necessary for the proper functioning of the loving couple. Because we must not forget that for a relationship to work, at one time or another, we will have to find ourselves making concessions, putting water in our wine, and putting aside our own. desires for the benefit of those of the other. Otherwise, it’s not really a relationship. It’s a life for two but each for himself. A kind of couple masturbation where each one seeks his little personal pleasure with the help of a partner; the pleasure and happiness of the other is of little importance to us. It is therefore evident that choosing to be in a relationship is a dose of work that some men don’t want to do.

Now,  getting into a relationship also means taking the risk of being hurt.

To love is to open your heart and make it vulnerable. Some men may be willing to put in the effort and compromise a lot, but not hurt.

This fear of pain, present in women and men, is very often unconscious in the latter who generally have the reflex to camouflage their vulnerability. So instead of facing it and taking the risk, he protects himself by creating this kind of emotional wall.

Determine our relationship potential with this type of man …

A man who is afraid is often a man who has already suffered and therefore has already loved. So he’s probably already valued love and relationship. He has probably already made the choice to engage with the necessary dose of compromise. Being in a relationship is therefore part of its values. It is the pain that makes him hesitate.  And although pain can create trauma that can last for many years, in the majority of cases, like anyone with injuries, they eventually heal and with gentleness and patience, confidence can be built. again.

When we have to deal with a man who has chosen to make his life alone because it is more convenient for him, the situation is a little more complicated. If he doesn’t value the relationship and the dynamic that comes with it with all that is positive and negative,  it’s a safe bet that you won’t change his mind. Well, maybe you could show him that living with you is not that complicated and demanding, but you still risk seeing him fly away with the first clouds.  A value system can change, but it will do so unintentionally and unexpectedly. In the same way that you will not be able to convince, by the sheer force of your speech, a person who has chosen not to have children to become a parent, you will not be able to convince a ‘free’ man of the benefits of loyalty, commitment and compromise.

How do I know if my man is scared or self-absorbed?

Well, there is no magic formula. You don’t try to play the psychologist by doing a thorough analysis of your emotional past.  Not only do you probably not have the skills to act as a therapist, but you are also not very objective since you are emotionally involved and will probably want to see what works for you. Moreover, categorizing it will not allow you to predict the future.

An injured man may stay on guard with you for years and get touched by another woman while a hardened bachelor may come to the conclusion that it is time for him to settle down and that you are there. perfect woman for him. We do not predict the future and we do not control it .

Powerless to change it, we think of us

Likewise, one cannot control the other nor know what is going on in his head and in his heart! Of course, some excel in the manipulation department and the fact remains that not only is this attitude unhealthy, it also has its limits. Faced with such a man, we can try to make him live with guilt, to flatter his ego or to hook him with the hook of s**xuality, but none of this will lead him to love you sincerely.

Love cannot be bought and you cannot force a heart to love!  It is therefore important to realize that whatever you do, you are not doing it for the purpose of making him change, but because it is what suits you.

Telling him that you are going to leave him in order to scare him and stimulate him to commit is only manipulation and will not have any serious results. If you are doing it, do it because you have truly gotten to where you are in your relationship. It should not be an empty threat, but an observation that reflects where you are yourself. If you are rather at the stage of still being patient, do not give an unfounded ultimatum in order to make him react faster. You would only risk losing and that wouldn’t be fair either.

If you’re at the point where you sincerely want to commit to this man and don’t want to waste your time in a one-to-one relationship,  talk to him!

If that scares him and he absolutely doesn’t want to talk about it, you know what you have to do. If he takes the time to listen to you, seems to be genuinely interested and concerned about your needs without being able to offer you what you need, you can deduce that he at least has genuine feelings towards you.

They may not be enough to meet your needs, but they can still be a start and maybe a hope. Perhaps he will be willing to open up a little more to you and allow you to understand him a little better. Communication being the basis of the relationship, you will at least be on the right track. You will then be able to assess the possibilities that this relationship offers you and whether these may meet your needs. 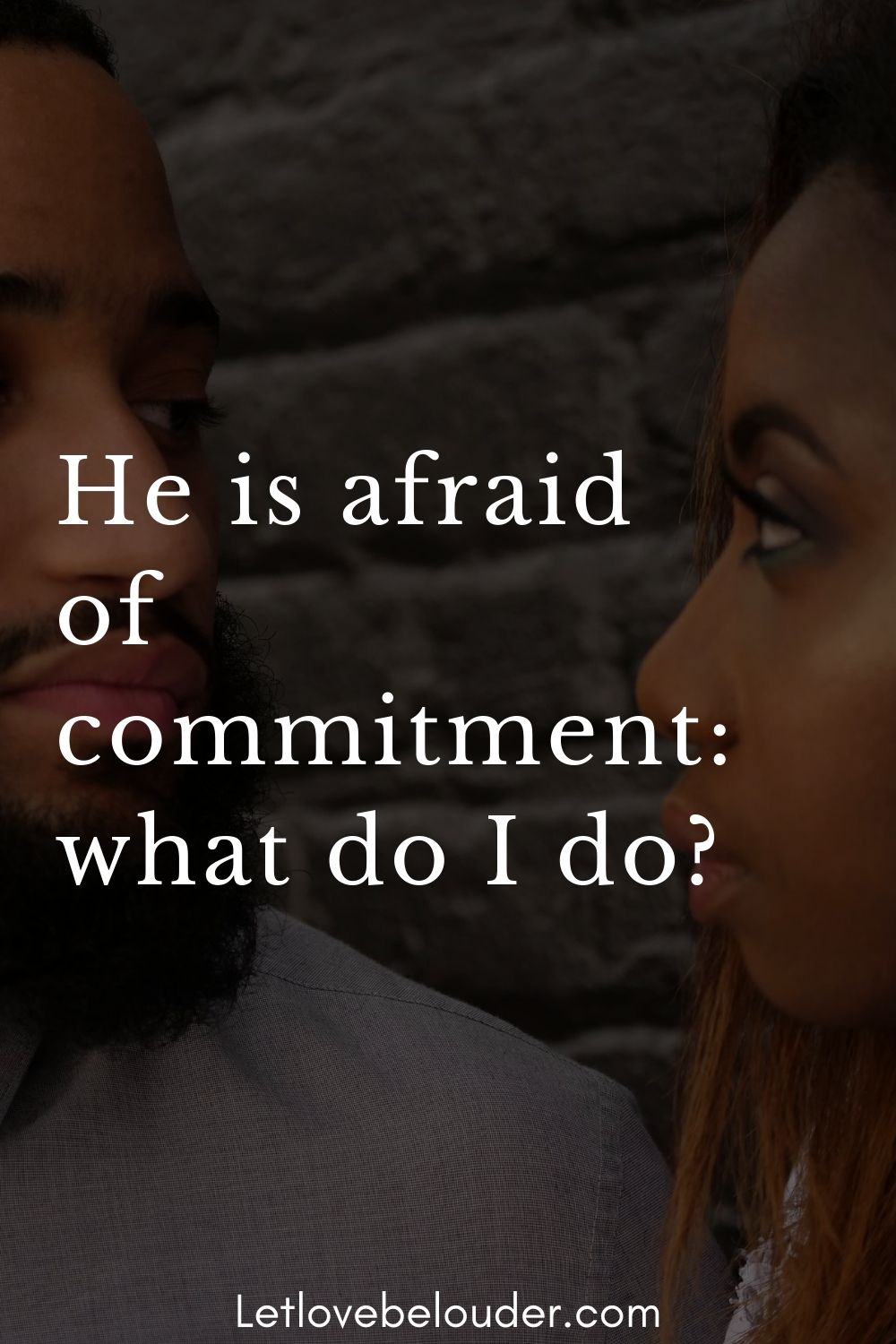