This is exactly what I experienced with a narcissistic partner.

When I ended the relationship, I was not the same as before. The world was all gray. Love and happiness were no longer what I believed in.

I was inundated with sadness, loneliness, and depression. I must have had a hard time controlling my life. Of course, I spent many weeks crying.

The grief and pain took so long to heal that at one point I began to believe that it would be impossible for me to pick up the pieces of my broken heart. I also thought I wasn’t emotionally strong enough to love again. For me, love was as far from my thoughts as the stars of the earth.

But at first, it was not all bleak.

I was a happy person who loved to live his life. I was always smiling and always saw the positive in any negative issues I had, and for the things that were going well for me, I was always grateful.

But it all ended abruptly when I met this narcissistic partner. My relaxed and balanced emotions became a shipwreck of anxiety and depression. I used to always go to bed hoping to get up with joy, but that wasn’t the case anymore. I went to bed exhausted and sad, then dreaded the idea of ​​a new day. I was no more than a shadow of myself.

At first, I was ashamed to let myself be used and abused. I spent long nights and many weeks blaming myself for being so stupid. It was one thing to know that he was narcissistic and couldn’t change it, but it was another to know that and let me torture me again. I had sleepless nights for weeks.

I trusted him without a shadow of a doubt. Sometimes I saw all the social signs that he was someone I could trust. He was gentle with his tricks. But towers are towers, and no matter how good they are, they don’t last. So I trusted him completely when he made promises to me, but they were never kept. Instead, he broke my heart over and over again.

At first, I was surprised at his level of commitment to the relationship. He was always there for me when needed and even went the extra mile to make sure everything was okay for me. I felt totally safe but then that gradually changed. But I didn’t know I was falling into a trap. It was what he wanted all this time. He wanted me to trust him enough to let go of my guard. Then this narcissistic partner went into attack mode. With all my defenses on the ground, so he could attack me knowing that I was defenseless and vulnerable at this point.

Yes, I loved him with all my heart and I paid a heavy price. I had ignored one of the rare warning signs that appeared on our first date. Indeed, at one point, I had discovered that before meeting him, he had broken a lot of relationships. Instead, I loved him with all of my being. But that was a mistake, because he didn’t know what love was. But I stayed with him in the hope that he would one day change. In fact, he made me believe he really wanted to change. But the reality is that narcissists cannot be taught to love.

With this narcissistic partner, I found myself trapped in my love

I was stuck in my complete obsession with loving her. I believed in love. I have always had a positive view of humanity and I also believed in the presence of a soul mate. When I met him, I learned that I had my other half, my soul mate. So when all of these questions started popping up in my relationship, I stayed with him. I thought everything was going to be fine and I just had to try harder. But eventually, I had to come to terms with the fact that I had made the wrong decision to be with a narcissistic partner.

Over time, I have become a shadow of myself. The strong, happy, and confident woman slowly transformed into a weak, depressed, and anxious woman. I only saw the negativity. I quickly started to believe everything he said and implied. I began to believe that I was worthless and that I did not deserve love and affection.

But I found myself

I went through the worst things for someone who didn’t even love me back. Still, I grew up to make the relationship work. But all the changes and improvements were one-sided and this narcissistic partner was telling me that I wasn’t good enough for him. I had given everything of myself and even more. It’s an understatement to say the relationship was bad. But you can glean wisdom from the worst circumstances that come your way. And if you choose to find in this life wisdom lesson, you come out of this crisis to become a stronger, wiser, and better human being.

But since I never gave up trying to find my identity, he did not continue to torment me psychologically.

I fought to find my identity

Second after second and minute after minute, I worked step by step. I was determined to emerge from the rubble that was once my life and my personality before the storm. I started to rebuild my life. I rebuilt my self-confidence and became a much better person than I was before I was in this relationship.

With time and a conscious effort to become better, I realized I had to harbor a terrible lie. He was the one who didn’t deserve all the love I had for him. 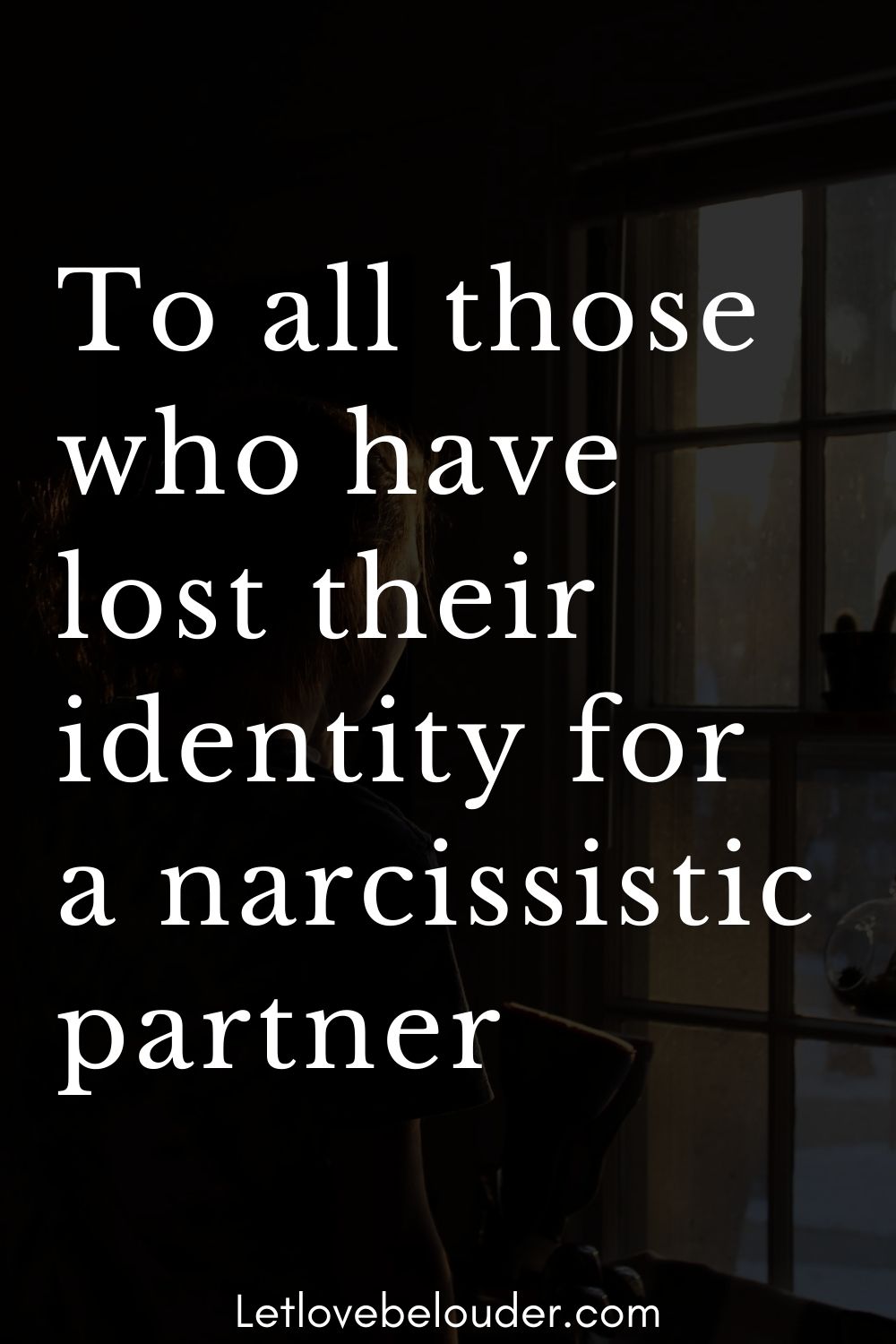