Breaking up with someone we’ve loved deeply is never easy, but it can teach us deep lessons and help us grow and move forward in life.

Here are 15 testimonials from people who share the lessons they learned from their heartaches:

“I learned that heartache is only temporary. Fortunately, I only needed once to learn this lesson. »Louise, 27 years old

“About ten years ago, I found a job in another region that was more profitable. My partner and I talked about it and decided that we would both move and he would move after me and find another job. As soon as I moved things started to get weird and he grew more and more distant. In the end, he told me that he would not join me and that he would not change jobs. It took me almost two years to recover. What have I learned? That hope is not enough. »Élodie, 34 years old

“Most of the time, I’ve learned that the unspoken can kill any relationship, no matter how much love there is. »Anthony, 23 years old

“To be honest, I don’t have if I learned anything from my biggest heartache that was probably my first love, except that he didn’t love me” Kristelle, 28 years

“I think some heartaches are worse than others. Breakups because of infidelity are the most painful. I had a girlfriend who ended up cheating on me with a really good friend of mine, someone I trusted. And the worst part is that I caught them in our bed. There are things you cannot erase from your memory. I’ve learned that betrayals can come from those closest to you. »Baptiste, 25 years old

“I have learned to be a better person. When I experienced my greatest heartache, I was the wrong person and he was a good man. It took me a year after the breakup to really look him in the face and see how much I had put him through. I am grateful today even though it was difficult. »Angèle, 31 years old

“I’ve learned that if you try too hard in the beginning, it won’t get easier over time. Beautiful love stories, like many wonderful things, happen naturally, there is no need to force it. »Olivia, 32 years old

“My greatest grief has nothing to do with a romantic relationship. This is the death of my childhood dog when I was 20 years old. I had him since I was 9 and I was in college when my parents called to tell me they were going to have to euthanize him because he had an illness that prevented him from walking. It was horrible not being able to come home to see him one last time. I have spent much of my life with this dog and we have grown up together. I did everything with him. So far, no breakup has been more painful than the death of my dog. »Bryan, 24 years old

“I’ve learned that there are people you never forget. I dated a girl for the last three years of college and was head over heels in love with her, even though she wanted to break up soon after graduation. We broke up, of course. I’m 33 and still think about her at least once a week. There are loves and sorrows that follow you for years. »Thomas, 33 years old

“There are ruptures you can learn from and others you cannot. Sometimes it’s because of an infidelity, or you just weren’t meant to be together or it wasn’t a good time. If you can look at things with some hindsight, it’s a lot easier to see why things haven’t worked out and take it as a learning experience. »Kylian, 25

“I literally married my high school sweetheart and he was also my first love. Honestly, I have never known heartache. »Claire, 29 years old

“I don’t know if I’ve learned any big lessons from my breakups, but I’ve learned to deal with them better by keeping my mind busy. If you don’t do anything to occupy your mind, you’re going to be thinking about it all the time. »Florian, 31 years old

“I had two children before my divorce at 25 years old. I’ve since learned that most men view single women with children in some way. When you have kids and you meet someone, you don’t get involved as quickly. »Sarah, 28 years old

“This happened a long time ago, but I’ve learned that even if you think someone is a good match for you, they might not feel the same no matter what they say. Some people will say anything just to get what they want from you. »Sandra, 23 years old

“I learned that love, like life, never lasts. You think you’ve found this little island, this safe little space away from the world where the two of you are only the two of you forever, but there is a tidal wave and suddenly there is no longer an island. Love fades, and that’s the most heartbreaking thing. »Jonathan, 32 years old 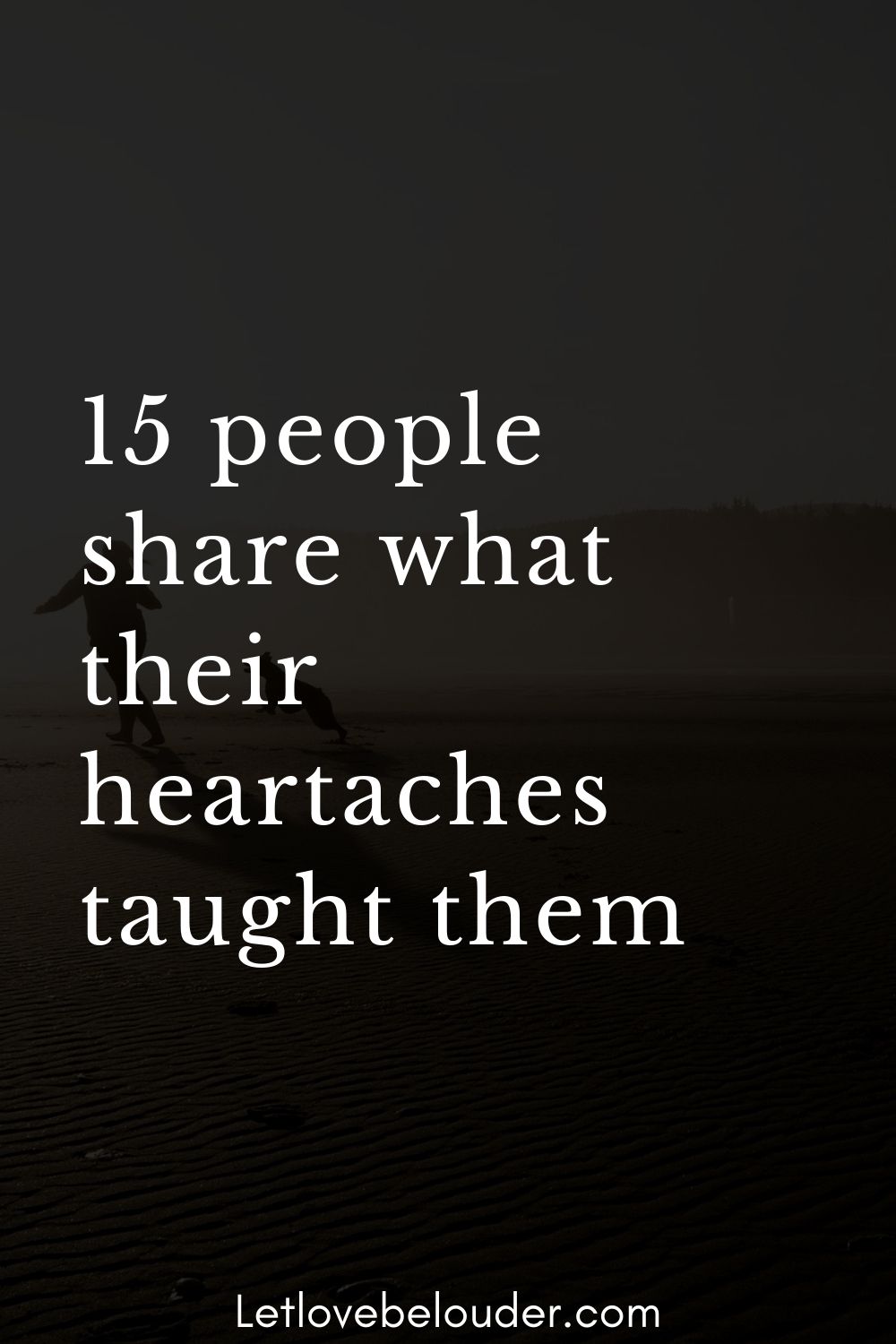