Women and their secrets, a story we will never understand!

Mysterious and enigmatic. We are not going to say that women lie all the time, but they only tend to hijack the truth, to say only part, or to say only what they want. Want to know the phrases that will never leave their mouths? Keep reading until the end!

1.I search your pockets and your phone when you sleep

Yes, most women check their man’s phones and pockets when he is sleeping tight after dark. Out of curiosity or jealousy, they can’t help doing it even if they know full well that Jules is loyal. It is surely following previous love betrayals. So, guys, watch out for questionable messages.

2.I confide in my little kitten

Yes, she will never tell you that she talks to her cat all the time because for her it is embarrassing. However, she tells everything to this little animal that she loves so much, especially the things that she will never dare to confess to you.

No matter how well you perform in bed, she’ll never tell you about her ex’s prowess. She prefers to be silent because she knows that it is not good for the future. At the same time, too, she would never put up with any hints about your former partners.

4.I want to earn more money than you

Just like you, your sweetheart does not like knowing that she receives a small salary, surely misplaced pride. In a couple, money is always a delicate subject, even taboo, so it is difficult to discuss it freely. Either way, she will never say the bottom of her mind about salary.

5.The exact price of the last bag I just bought myself

So this is the top-secret to keep for life. She will never tell you how much it cost her the 23rd bag she just bought, even if she was happy to make up for the little argument you had between you last week. Little hint: if she gives you a number, knows that the exact price is double!

6.I want more than anything to receive an expensive ring

Even if she tells you that she doesn’t want to get married that much and that she doesn’t want a ring that will cost you the skin of the buttocks, know that deep down, she only wants that. Thus, she hopes at each end of year party that she will have THE flashy ring at the exorbitant price. So, if you don’t want to disappoint her, start saving now to buy such a piece of jewelry!

7.I threw away your ugly old t-shirt from another era

She had hated your damn ugly sweater for months, she kept telling you to throw it away, but in vain, so that you finally decided to do it, she bought you another one. brand new, but you never parted with the old one. Don’t be surprised when you won’t see it anymore, because surely she tore it up afterward, she burned it, but that, she will never tell you.

8.I have already tested you

She’ll never tell you that she’s already tested you to see if you fell for it or not because she’s not very proud of it. So, she asked an office colleague you don’t know to charm you. Obviously, if you were seduced, you will not be together anymore, if not, you have earned his trust, well done!

Even if you don’t give a damn about her weight because you love her for the way she is, she will never admit to you how much she actually weighs. Question kilo, rest assured, she is not lying to you alone, but also to herself.

10. In my fantasy, you were not present

When it comes to female fantasy, women are not going to discuss it with their man, they are rather open with their girlfriends. It is true that it is difficult to say, without hurting the other, that it is not part of their fantasies.

11.I get up at midnight to stuff myself

When she indulges in a draconian diet that deprives her of everything she loves in order to look like a starlet, she gets up at night to eat a packet of crisps in the kitchen on her own and in total darkness. Deep down, she would like it to stop, but never, she will tell you the bottom of her thoughts.

12. The scenarios are already ready

For her, the scenario begins with a perfect marriage proposal, then comes the princess wedding, the one she always wanted to have since she was little, but it does not end there, the most terrible scenario concerns your infidelity, she knows what she is going to do to you if you ever cheat on her. So, be careful! 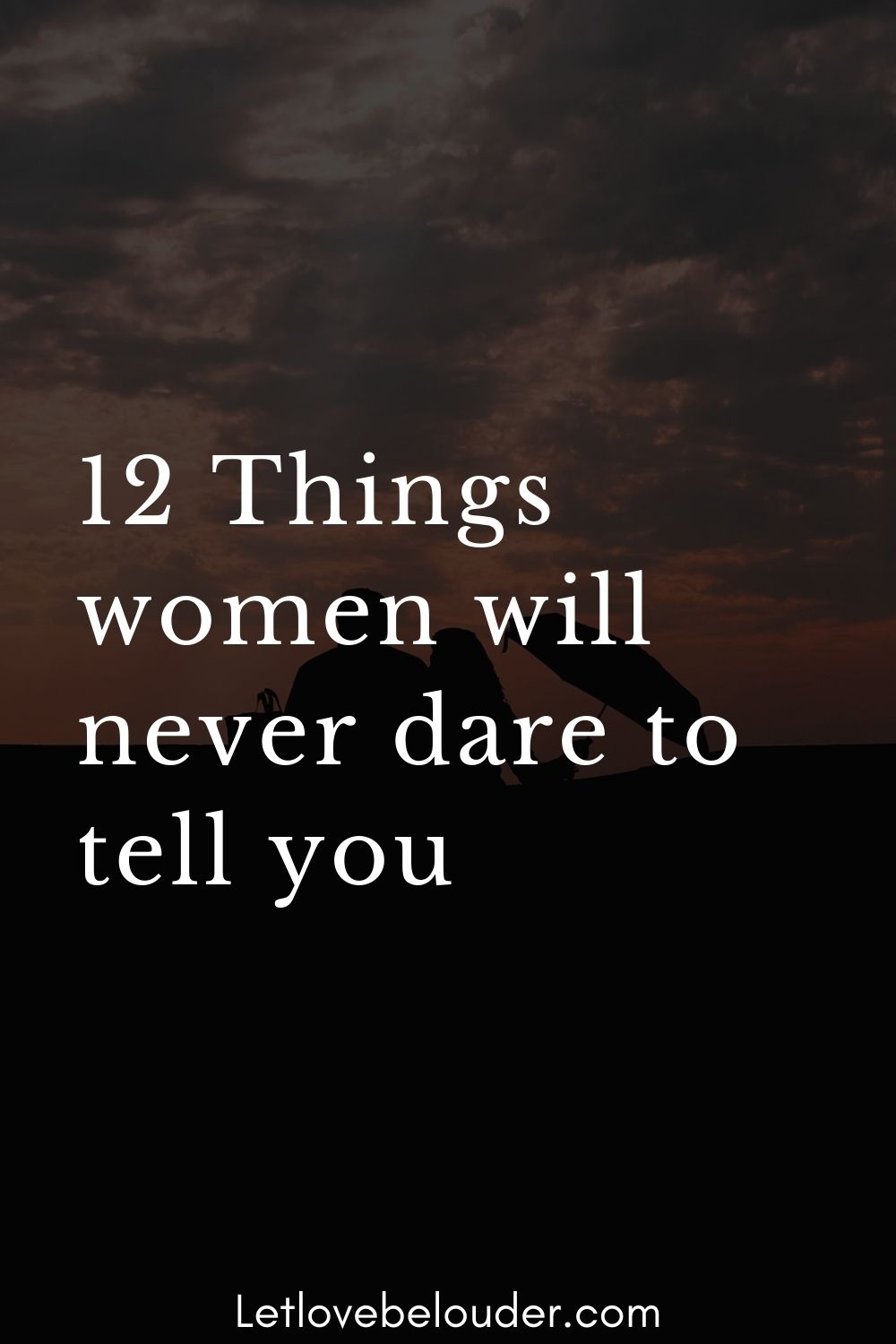