You are used to being chased. And why should you not be? You do not have to do anything, nor to take the lead and I understand. It is one of the advantages of being a woman.

We get flowers, they always take the first step, and it’s up to them to conquer us.

In fact, most men like to “hunt”, and they are the ones who want to chase after and not be chased.

So, it would be smarter for you to never run after a guy because, let’s face it, if you want, you should let him work hard.

At least you will be sure that if you stay with him in the future, he will make an effort and treat you as you deserve.

But the catch is that some men prefer to be chased, why is this so?

Well, some are just shy and do not have enough confidence to “attack” a woman because they are too afraid of failure or being humiliated.

While others simply love women who show initiative and take the first step.

You shouldn’t “attack” him too suddenly because you might scare him, and you shouldn’t be too passive either, because he will feel like you are not that interested. You have to know how to find the happy medium.

Here’s what it will do if it wants you to take the first step:

1. He is interested then suddenly he is no longer

Maybe this has happened to you before and you didn’t know why. You meet a cute guy and you exchange texts and calls.

It is all over you and then it suddenly disappears without any warning.

Obviously, you have already fallen in love with it, so the only logical thing you have to do is to pursue it.

This is exactly what he wants. The only catch is that if he does too much and gets too far away from you, you risk losing interest and moving on.

That said, if he cuts all contact, it means he wants you to chase him.

2. He tells you how he feels but does nothing

When a guy behaves like a child and prefers to play stupid games with you, instead of admitting that he likes you and doing something about it, it is that he really wants to be chased.

For example, imagine a guy you like coming to ask you if you’re in a relationship.

And while you’re talking, he gives you multiple clues that he likes you.

You feel that he is interested in you and that he wants you to try your luck and go out on a date, but he never does anything about it, except talking.

This means that he does not have enough courage or that he simply does not want to pursue you, but that he wants you to pursue him.

3. He plays hard to have but with a dose of jealousy

Playing hard to have is basically the basis for every enticing game. There is no seduction without that.

Send contradictory signals, play hot and cold, all this worked well before. Today … not that much.

Especially if you do too much, the other person may lose will because they don’t have the time or the strength to play games.

Not to mention the fact that in the meantime, we risk meeting someone else who enters the game, while the person who played hard leather can only be jealous.

Yet another sign that he wants you to chase him.

4. He shows you his feelings and then he disappears

It’s completely confusing because if he had the courage to tell you what he feels in front of him, why won’t he invite you out?

Again, either he is too shy to do it, or he thinks you don’t feel the same for him.

Please really encourage him to take the next step; because it will go away if you don’t.

Another explanation for this situation is that he wants you to make the effort to seduce him. Especially if he is sure you like him.

This is why, he will admit that he has feelings for you and will disappear from the face of the Earth because he knows that you care enough and that you will pursue him and find him.

5. He disappears and then He comes back

Well, it’s obvious. First it will go away and if it doesn’t work, guess who will be back in your life once again!

He probably hopes that you will understand his subtle clues that you like him, and that when he disappears, you will run after him.

But his signs were probably too subtle and you couldn’t interpret them, so he’s making a comeback in your life, and trying to play the same trick again.

But this time, more aggressively. Keep in mind that he is just leading you and that he is preparing to be chased by you! 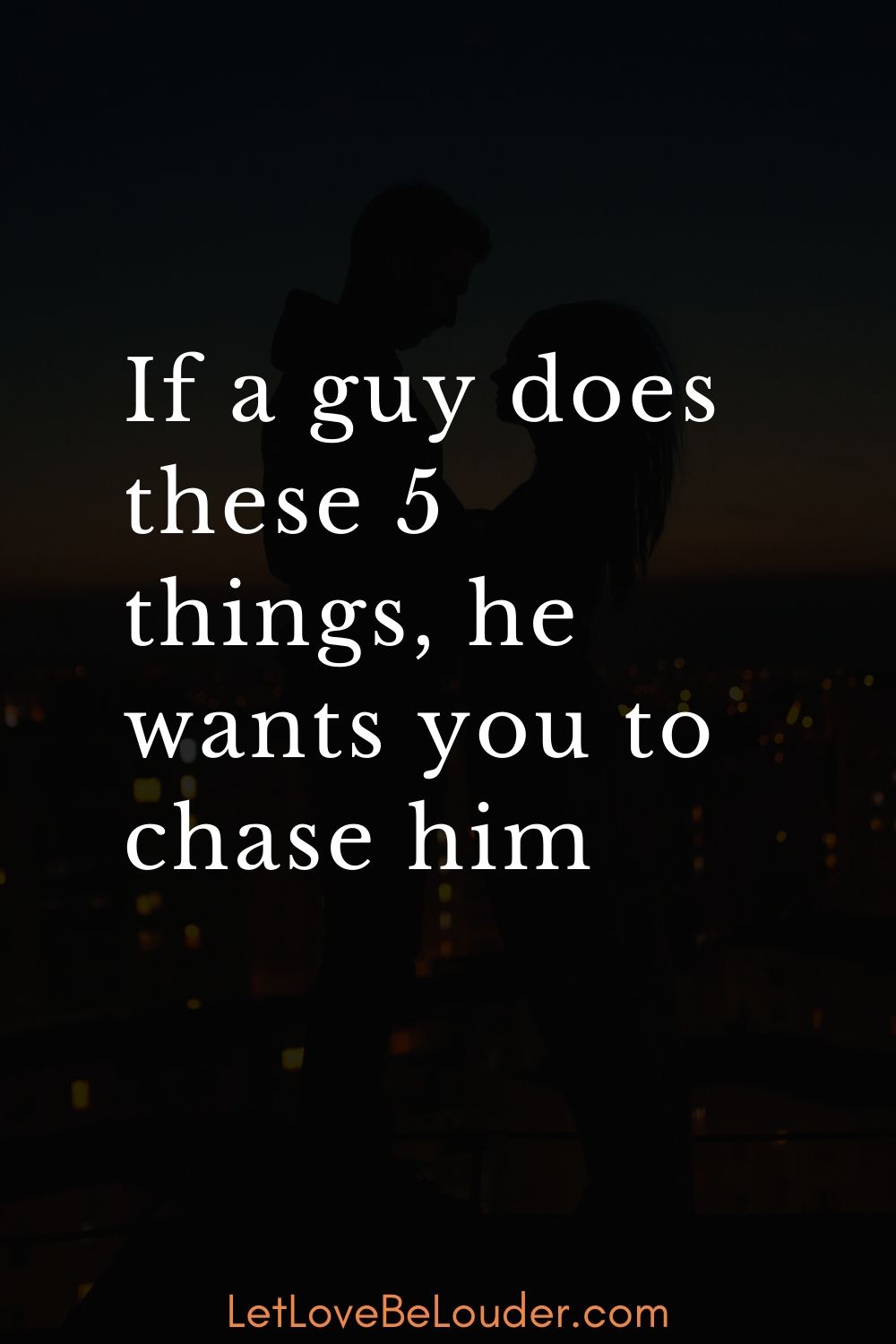