It can start as a joke, then it can get more common over time, but one thing is for sure: when you meet this kind of man, you will have no idea who he really is.

You will have no idea that he presents himself as someone completely different.

As at the beginning of any violent relationship, you will have the impression that you have finally found the right one.

You will think that at last you can feel safe and loved.

Because that’s what they do, they sneak in and surprise you when you least expect it.

They pretend to be loving and compassionate in order to gain your trust, to make you succumb more easily to fall into their “safe” arms.

After he has caught you as a predator, they can do whatever he wants with you.

There are all kinds of abuse in a relationship, and I wrote about each of them.

Everyone is painful and excruciating, especially when it comes to emotion. But we never really talked about verbal abuse.

Verbal abuse is not widely noticed because it is very similar to narcissism and other personality disorders, but it leaves no evidence on the victim.

There are no bruises, no scars.

You can get out of the house within seconds of being verbally abused or otherwise abused.

You can smile, and no one will have a clue what you just went through.

No one will have a clue that you are having trouble keeping your wits about.

No one sees the sadness in your eyes and the emotional fatigue that completely overwhelmed you.

Why is he abusing you verbally?

You’ve probably felt guilty hundreds of times, and you thought you deserved it because you provoked it.

It’s bullshit, and deep down, you know it.

You are just afraid to accept the fact that your nice boyfriend, your real man turned out to be an attacker.

The abusers have feelings, believe it or not, but the only way they know to show them is anger and disappointment.

Usually, they are probably hurt or sad inside for one reason or another, and releasing their anger at the nearest person is their way of dealing with their own insecurities.

So when you feel less worthy and smaller than him, he feels better.

He needs to undermine another person in order to feel better and more powerful.

It uses verbal abuse to make you feel like shit, to destroy your self-esteem, and in this way, to turn you into someone who is incapable of making decisions by himself, an easy person to control.

It is a process that takes time to come to fruition.

It had been his plan from the start.

From the first day he met you, he wanted to gently infiltrate your life in order to get comfortable and be able to suck your energy dry safely.

1. He forced you to think twice before speaking

You knew that if you were unfortunate enough to say something wrong, something that he might not like, he would lose his temper.

You knew he would overreact, and you knew what it meant to you.

It meant insults and verbal abuse.

So when you are with him, you think carefully about what to say and what to keep for yourself.

In fact, it all depended on his mood that day.

If he was in a good mood, you would find a way to say something to him as painlessly as possible, but if he was restless and grumpy, you would certainly keep it to yourself.

2. He called you all names

Of course. In short, no one has the right to insult you, your family, your friends or your boyfriend.

No matter how angry he is and no matter how ruined his day, he should be able to handle his problems on his own.

Even if you provoke him with something you said or did, he cannot react by calling you stupid, bitch, or God only knows what you have heard so far.

3. He never agreed with you

If you were positive and happy, if you were excited by something and wanted to share your happiness with him, he would directly disagree with you.

That means he didn’t respect you enough to let you be happy.

Maybe he was jealous that you felt good when he was not and since he did not love you, he tried to hurt you by lowering yourself to the ground and destroying your happiness.

4. He was silencing you

He didn’t take your opinion into account, and he didn’t care.

He didn’t want to hear anything from you, and if you said it anyway, he laughed and made fun of you because he thought it was stupid.

According to him, you were always wrong and he was always right; he knew everything and you had no idea

And if it upset you, he called you too sensitive and immature.

5. He distorted your words

When you had had enough and you could no longer bear his violence, you tried to confront him by calling him an aggressor.

Then he got angry and went crazy.

So he was going after you because deep inside he knew it was true, and the truth always hurts.

It was a huge argument that ended with you being the bad guy.

He changed the discussion and turned to something you said or did months ago.

He remembered your words carefully because his memory is impeccable.

He remembered exactly what happened before, and he used it against you in these situations.

He took your words out of context and distorted them to be in his favor.

He behaved as if you were a baby who understood nothing.

He belittled you and disrespected you that way.

He did that to make himself better than you and make you feel like you were inferior to him.

He intentionally used a condescending tone and chose words that were meant to hurt you just to boost his ego and destroy yours.

7. He brought out your insecurities

When he had nothing else, he went out on the oldest tour in the world.

When all other tactics failed, he played this wild card. He was trying to use you against you.

He tried to play with your mind to force you to hate yourself.

He intentionally brought out the things you are most sensitive to and used them against you.

All of this to make you feel useless and ugly, to make you question what your purpose is in this life and why you are on earth.

8. He justified his bad behavior

He lived in total denial.

He didn’t want to admit that he was nothing more than shit, an unhappy and frustrated leech, someone who sucks the energy of others to feed himself.

And when he succeeded, it held him for a while.

He forgot how unhappy he was, and he appreciated the energy he took from you.

When there were none left, he would come back and do the same thing again.

No, he’s not a real man. He’s just an attacker who claimed to be something you were looking for. 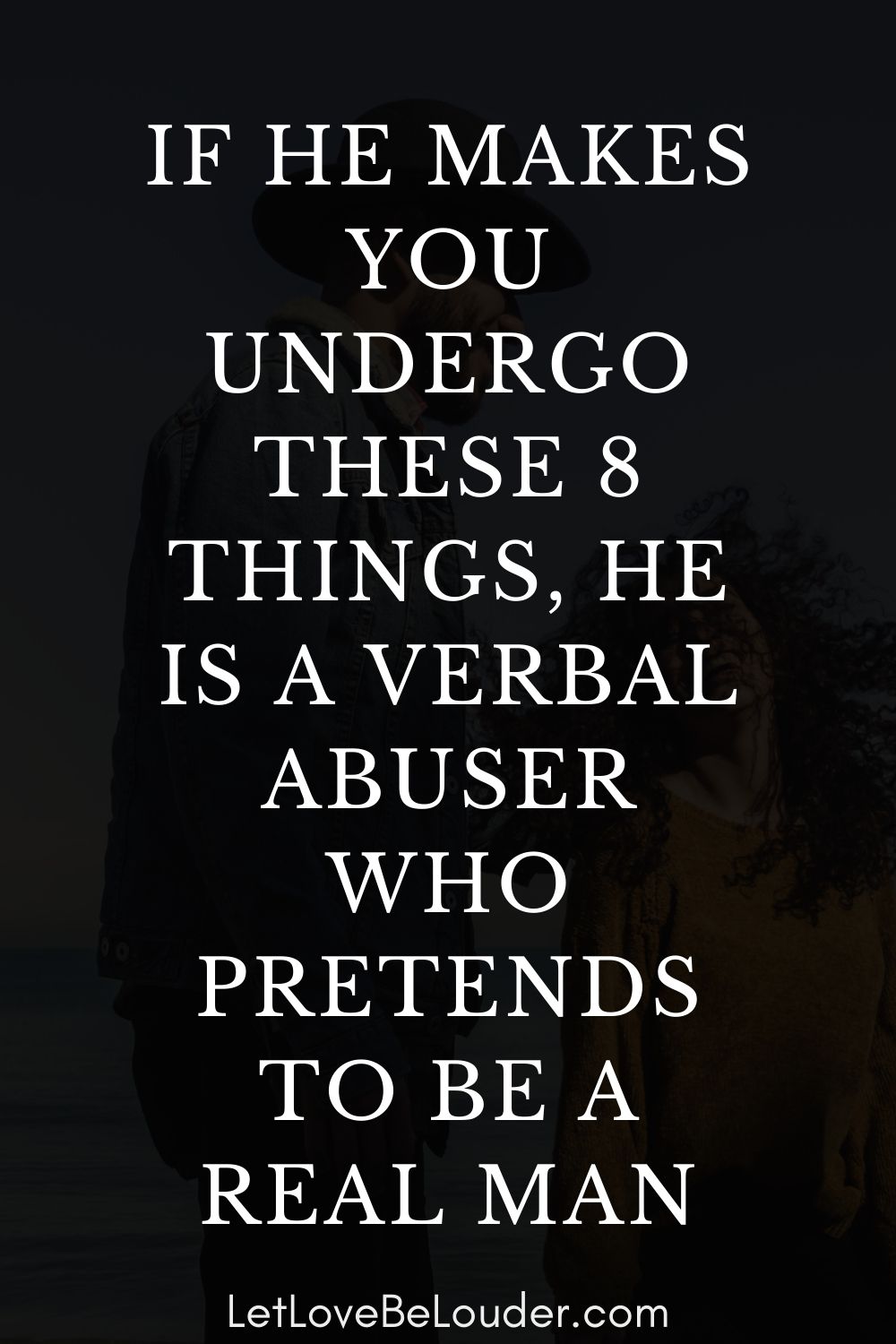