Do you hate contradictory signals? What did he mean when he said/did/did not do this or that?

It’s rather frustrating, but it seems that today’s dating scene cannot survive without contradictory signals.

It is not easy to enter a man’s mind and try to understand what he means. However, we did our best.

We asked 30 men to be brutally honest when it comes to conflicting signals and here is what we found:

1. A text message he sends you out of nowhere after having disappeared from your life for a long time

It just checks if you’re still there, if you still care enough to respond. In general, he doesn’t want anything concrete, he just wants your attention.

If the text is short and effortless, don’t even bother to answer. He wants to boost his ego by believing that he can have you at any time when his SMS appears on your screen.

2. Send text messages all the time but never ask yourself to go out with him

He’s a man who texts without intention. He just likes to keep in touch with you, he likes the conversation and appreciates the attention he receives and nothing more.

If you’ve been texting yourself all the time or have been keeping in touch for some time, and he still hasn’t had the courtesy to take you to a real date, you’re in a flirting relationship that will never turn into a real relationship.

3. He starts the conversation and then disappears for a long time

He plays games, that’s for sure. Let’s be realistic: a man who sends you a text message to which you answered almost immediately, still has his phone in his hands and he can see that you answered him.

It simply delays the response to let you know that you are playing by its rules. He wants to increase tension and anticipation and make you more addicted. Don’t play his game.

4. He retires after a few nice dates

The first and most likely thing here is that he’s not just hanging out with you, before he had time to text you and see you, and now he’s using the “busy” excuse.

He probably sees other women on the side. Don’t get too attached and keep your options open.

Second, he may not be ready for a relationship because he has recently broken up and has barely noticed it.

If so, thank him for not making you his bounce friend and say goodbye.

5. When he says he just wants you to be friends but keeps flirting with you

He wants you in his life, he probably even likes you, but he doesn’t want to go out with you or enter into a relationship with you. This is why staying in your life as a friend is the safest way to leave.

He made it clear that he is not for something serious so he has no obstacles to flirt freely with you.

But don’t get confused, it’s just for the fun of flirting, some men are just like that.

When a man calls or sends messages only late at night, his intentions are clear: he wants to be hand to hand with you.

He’s probably drunk and lonely, or both, and needs a little hug on the pillow and try to see if it’s possible with you.

If he doesn’t invite you out, if he never sees you during the day and you only see yourself when it suits him, you have to face the fact that you are his asshole, a friend with friends. benefits and nothing more.

7. He saw you with another guy and now he’s making an effort

He saw you with a random guy, who may be just a friend, but it made him jealous. It sends SMS, calls, comments and likes photos on social networks all of a sudden.

He probably behaves this way because he sees the other guy as a competition, and as soon as he sees that he can get you, he will cool down again.

8. He says he’s not ready for a relationship

He may not be really ready or he may be smart and play his game. He knows how the female brain works and that by adding “right away” to her sentence, it will be the only thing she will hear.

He raises false hopes that one day something more significant could happen, especially if his story continues with “let’s have fun”, “we don’t need labels” or “let’s keep that for now and let’s see what’s going on. “

You don’t have to wait and see anything, it just tells you that he’s not the type of guy for a relationship and he never will be for you.

Do not waste your time with him if you want something more real.

In the end, a guy who likes you will not send you contradictory signals, except maybe very early while he is still trying to be by your side, to avoid getting ahead of himself.

But if its behavior continues, don’t even bother to read its contradictory signals and review it where it came from. 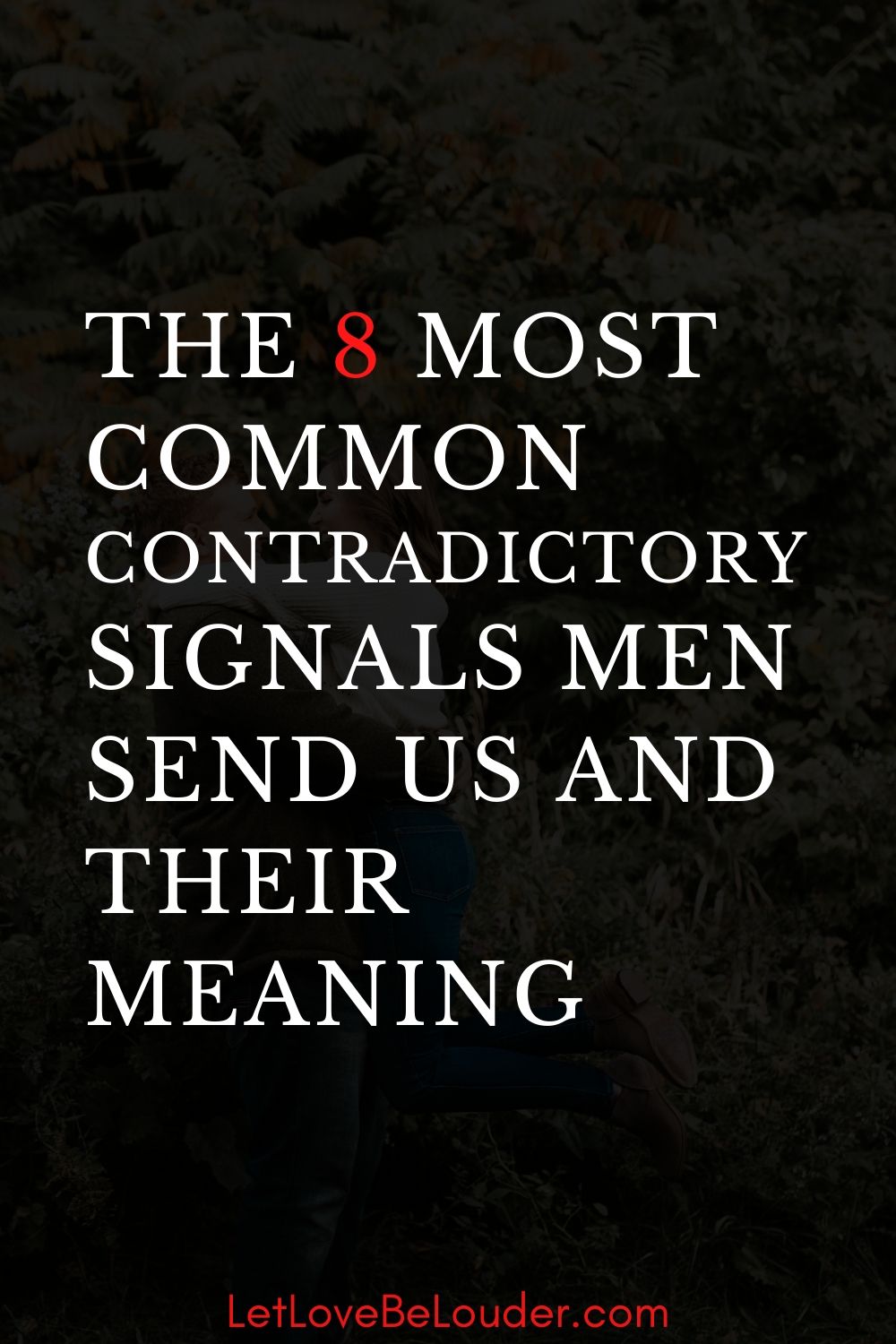