We’ve all been there. We yelled on the phone, texted endlessly in the middle of the night.

We all fell asleep in tears wondering why this is happening to us.

“Why me, damn it?” Who has not said these words at least once in their life?

You have probably given up on men and cursed them by saying that you will never go out with someone again.

Convinced that you do not need this drama and this pain in life.

So after liters of ice or some other poison that you take when you need comfort, you have realized that you will be perfectly fine on your own.

You don’t need a man to be happy.

It was the key phrase of your life at the time and you made peace with these words, perfectly able to continue living without him.

Of course, it can’t be that simple.

Especially when you go through a painful breakup quickly and without major consequences, you know that something is going to happen.

You know that things cannot end so easily. Something crappy is brewing that you don’t know anything about yet.

And this is … the fact that he wants to get you back.

Why is he doing this to you, for the love of God? Why does he want you again after rejecting you?

He didn’t want you when he had you and now that you’ve moved on and found peace.

Once you have accepted the fact that being single and happy, it crawls back, swinging you from the hidden signs in the figure.

What are you supposed to do?

Are you supposed to jump for joy and welcome him with open arms or tell him to go to hell, that he had a chance and screwed it up?

Perhaps you should first determine the reasons why he wants to get you back and why he doesn’t want to admit it.

First of all, do you know if he loves you or if he wants you to come back because he feels lonely and needs to boost his ego, or he just wants to sleep with you?

To find out why he wants you to come back, you must first see if there are signs that he really likes you or if he is using you for any other reason.

Signs that he really loves you:

There is no one but you. When you enter a filled room, his eyes will be on you and only on you.

When he looks at you, he opens his heart wide and his eyes reveal how vulnerable he is.

2. He knows what matters to you

He remembers things he knows are important to you.

Although you have broken up, he continues to text and call you from time to time, usually when something important happens that he is aware of.

So no matter how broken you are, he’s always there to support you about the things that matter to you.

3. He asks for your opinion

Even after you break up, it asks for your opinion. He wants you to give him advice on things he can’t manage.

He wouldn’t ask for any of this, and he wouldn’t even contact you if he didn’t always care about you.

4. He’s trying to make you laugh

Even after all this time, you still receive a text from time to time with something funny that happened to him or a joke.

So it means that you are still in his head and that he probably still has strong feelings for you.

5. He wants the best for you

This may be the main reason why he broke up with you.

Maybe he thinks he is not good enough for you and since he loves you so much, he lets you go because he only wants the best for you.

He is not a manipulative asshole who thinks only of him.

Maybe he really loves you, madly, deeply, and now he wants you to come back but won’t admit it.

If he shows some of these signs, you can be sure he still loves you and wants to get you back without admitting it.

He knows he made a mistake and thinks there is no way you can take it back.

So let’s find out what it really is, does he really want to get back with you?

Signs that he wants to get you back, but he doesn’t want to admit it.

1. He tries to forget you too quickly

No one can recover from a breakup in a few days. It is a long and painful process.

And even if he didn’t love you, it wouldn’t be easy to move forward at the speed of light.

No, this is just a confirmation that he had strong feelings for you and that he wants to forget them as soon as possible.

You cannot break off hoping the pain will go away in seconds as if you had torn off a bandage because it is not.

Things don’t happen like that. You have to cry, hate your life for a while before you can accept it.

So if you see him partying and going out with other women and screaming over the rooftops that he’s okay and that he’s tired of you, know that he is just the opposite.

He is desperate and faces the fact that he made a huge mistake.

2. He stayed in touch with your family

Ok, we all know that we choose our partner, but we don’t choose their family.

The family comes with them and if you love this person, you have to accept their family and learn to love them anyway.

Now, some are fortunate enough to have super cool in-laws, and others are not.

If your ex is still in touch with your family and he doesn’t have to be, it’s an obvious sign that he still loves you and wants to get you back, although it seems like he doesn’t admit it for any reason.

3. He asks your mutual friends for news of you

These friends are not in a comfortable situation.

Usually, they have to take sides, but there are some who stay in between, no matter what.

These friends are the most frequent targets of exes who want to find the person with whom they have broken up.

He will likely ask for news of you, what you are doing or if you see someone.

He will be very interested in your life because he regrets that he is no longer part of it and that he very much wants to see you again.

He texts you for no reason.

To check if you are well, to see if you agree to be friends with him, despite the fact that you are no longer together.

In fact, what he wants is to see how you are doing, if you are as unhappy as he is, and if he feels that he is, he will try to get you back because, obviously, he has made a huge mistake, and won’t admit it.

He blames himself for letting go of a perfect girl like you.

5. He talks about your relationship

He keeps mentioning the good old days and how much fun you had together.

The truth is, most of us only remember the good times after a breakup.

It focuses on the good times that you shared on purpose with the intention of bringing you back to these good memories.

So he will strategically wait a while before coming back and talking about happy memories.

If you still have feelings for him, give him a second chance and an opportunity to explain himself because he’s obviously still mad about you.

6. He changes to be better

You cannot change someone and this is a fact.

I mean you can’t change the background, but you can change the behavior, the reactions and the actions that someone takes.

You can show that a behavior is not correct, point to errors and help them correct them.

The point is, the only thing you can do is show others where they got it wrong and support them if they want to do it right.

While you were dating, you wanted to achieve it, but he didn’t want to listen.

He thought everything was fine with him. Now he has probably realized that you are right and wants to change and grow.

He wants to learn from his mistakes and improve his behavior.

You can see it clearly by the way it behaves now.

This means that he has taken your words seriously and wants to improve and get you back.

7. He calls you when he nods

A drunk spirit speaks of a sober heart. It is the absolute truth.

When under the influence of alcohol, our rational mind takes a break and all the things and feelings that we hide inside come out.

We don’t care at all about the consequences of our words and actions and it looks like almost everything that rests on our heart and soul.

So if he is drunk and he tells you that he still loves you and that he would like to get you back, it is probably because he really wants him.

However, this can also be an awkward situation because he may just want to sleep with you.

So how do you know which of these two situations is true?

Well, if he calls you back in the morning and shamefully apologizes, then you know he was serious, but if he doesn’t call you will know that he only wanted one thing – s**x.

8. He is active on social networks

He follows you and likes your photos, but not in a scary way, but in a healthy and friendly way, or he does the opposite: he posts too many photos of him having fun.

The first scenario represents his calm and rational way of showing that he likes you.

If it was not the case, he would not be interested in your photos or your profiles on the internet.

The other scenario shows her irrational and strange way of coping with the pain of losing you.

He displays pictures of him partying and hanging out with different women.

It’s his way of trying to make you jealous and his cry for help because he just realized that he lost something that he shouldn’t have lost to you.

9. He mentions your break up

Maybe he does it out of nowhere or he has invented a whole introductory scenario that will lead him to talk about the reason for your breakup.

Either way, he clearly has unresolved issues that he would like to resolve.

Why else would you bring up something as delicate and painful as a breakup if you don’t want to talk about it and try to fix it, or just move on?

If he talks about the breakup, it’s probably because he wants to solve it, even if it’s just as possible that he wants to turn the page.

The best way to tell which of the two is at stake is to let the conversation go in the direction it wants it to go.

If he expresses regret and sadness, it is because he wants you to come back, but if he is content to tell the facts and seek answers, he only wants to come to an end.

10. He wants you to be friends

After all, whatever happens between you two, he will do anything to keep his friendship with you.

He will try his best to keep you in his life even if it means that he will suffer in silence because he loves you but cannot recover you.

Think about it. Who would like to stay friends with their ex? Who wants to be reminded constantly that you don’t get along and that all you have behind you is a failed relationship?

Only the guy who wants to get you back, but doesn’t want to admit it. 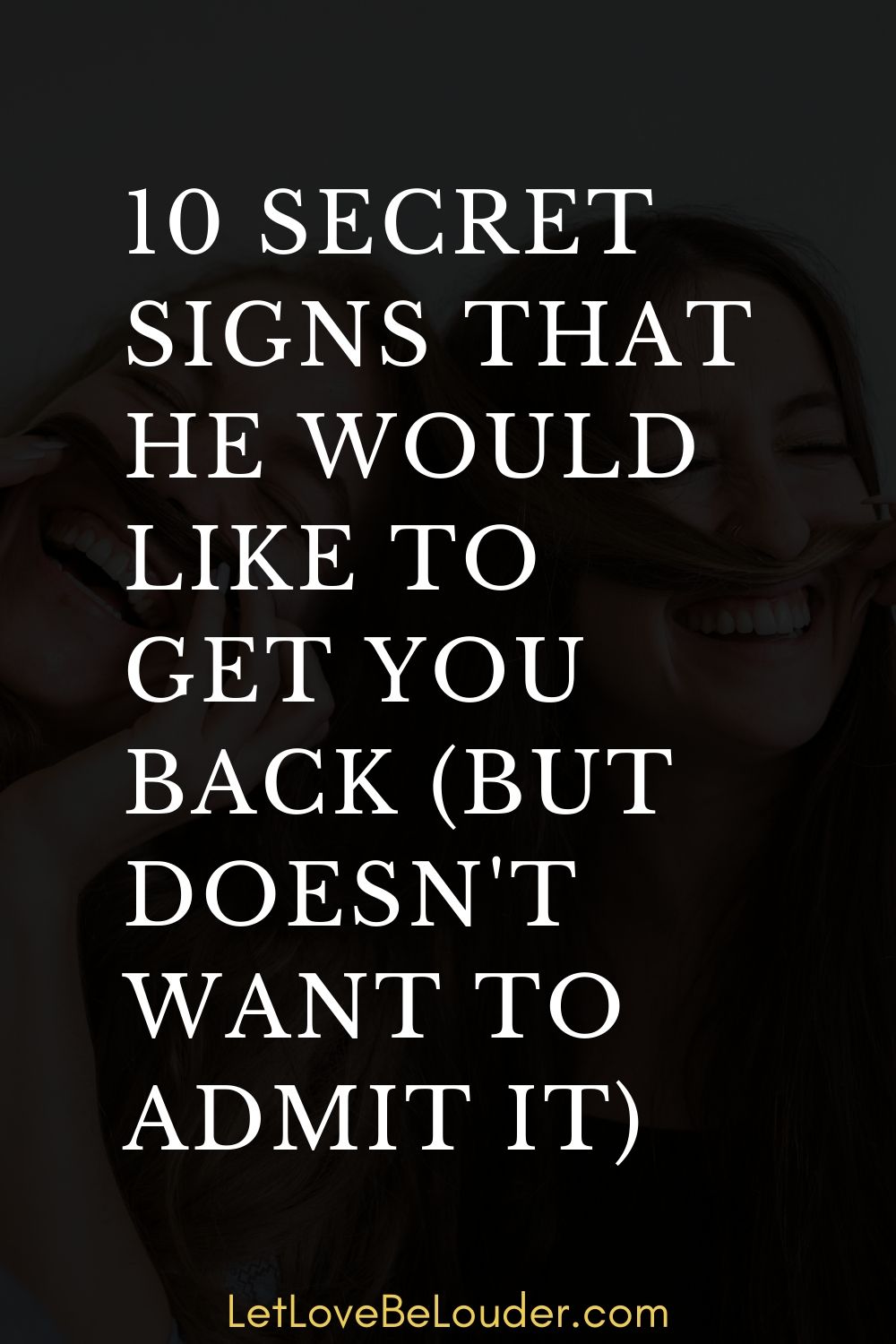