You know, this worry in the hollow of your stomach and this form of fear that consumes you but that you have chosen to ignore? Well, that’s what a narcissist feeds on, it’s what keeps him alive. This is what gives him the strength to continue to use and mistreat you.

Most empathic and deeply sensitive people experience these feelings of worry and fear – it’s their gut that tells them to run away.

But precisely because of their extremely sensitive personality, they choose to ignore their instincts and find themselves trapped by the canvas that a narcissist will have woven.

Unfortunately, this is not how it works. Once you get stuck in a narcissistic relationship, it’s almost impossible to escape. You become addicted to the narcissist. We feel a perpetual fear of which it is the origin.

But when you finally find the courage to walk away from him, when you realize that there is no other way and you don’t even worry about what could happen to you if you leave, he would do everything what is in his power to recover you.

He will put back that mask he wore the first time you met him. He will take care of you. He will convince you that he is there for you, no matter what. He will even apologize for all the horrible things he did to you. He will pretend to care about you so as not to get lost.

Unfortunately, it is not for your good that he wishes to keep you with him. He wants to keep you because he doesn’t want to lose his perfect little victim. He would lose the elixir that keeps him alive – you.

When you left him, you thought the nightmare was over. But no, he continues. First, there is the fight going on in you, in your head and in your heart. Then there is the fact of having to pick up the pieces and glue them together.

There is also the need to realize that you have value and that you deserve better. Finally, you need to regain your self-confidence and your respect for yourself. He took all of that away from you. It has emptied and shattered you and you know that your struggle for survival has only just begun.

Not only do you have to take care of yourself and heal, but you also have to face it. He will attack you and catch you when you have lowered your guard.

We then speak of “hoovering”.

“Hoovering” is a tactic used by psychopaths, sociopaths and narcissists, to drain your life energy and recover when you have almost managed to leave, all while exhibiting supposed behaviors “ attractive ”.

So, here are some of the speeches most often used by narcissists, in order to convince women to return (“hoover”) within the relationship:

1. “I really want us to stay friends”

This is often said in the event of infidelity, if you catch them cheating on you or they admit it themselves. But don’t worry, they’ll go away and find thousands of reasons why it didn’t work out between you.

They will certify that you were not made to be together and that you were unable to give them the love they needed. You are unlikely to feel guilty because that was the tactic planned from the start.

After a while, he will come back and tell you that he cannot live without you, that he made a terrible mistake but that he preferred to take a break because of the things he told you about the fact of no longer love you.

However, they will assure you that they are unable to live without you and that they want you in their lives, at least as friends.

In truth, they are afraid that you will meet someone else, that the latter will conquer your heart and make them appear as misfires, when this is not supposed to happen.

So, he jumps at you with the speech: “let’s stay friends”, which is nothing but a lie. You will end up being sex friends, he will be involved in your life and you will be unable to move on.

There is a completely different scenario, in which they will tell everyone who wants to hear it that they stayed friends with you because they felt sorry for you, although you keep telling everyone that is a violent bastard.

But it’s not their fault, ever. They are the ones who make you a flower. In any case, that is how they wish to be seen.

2. “I want us to undergo couple therapy”

When you can’t take it anymore and you are about to leave it, after the silence you have watered it, it will play one of the last tricks it has in its sneaky collection.

He pretends to be broken and sad and admits that he needs help, that he is ready to go to a marriage counselor.

Of course, this is just a comedy to manipulate you – a skillfully orchestrated little game to trick you. No, he doesn’t want things to work, he doesn’t want to be a better man because he thinks he has no problem anyway.

It does this simply to save time. He will even be ready to actually go into therapy with you and give himself the right role there.

He will somehow make you appear to be the person to blame. He will play the role of the man who wants to stay with you despite all the problems you cause him.

If you catch him cheating on you, he will find excuses. He will try to convince you that he met this girl when you were separated and that now she refuses to leave him alone.

He will tell you that he has tried everything but that she refuses to give up. Or, once again, he will accuse you and say that if he went with her, it is because you did not invest enough with him and that as a result, he felt alone and unhappy.

It is only an excuse in case you discover his infidelity. He’ll assume the role of a helpless being who just needs someone who loves him, when you don’t love him.

He will use this opportunity to manipulate you, make you believe in things that are not real and destroy your self-esteem. He just wants you to doubt yourself.

You will suffer from the fact that she was with him and you will not. Which probably means something is wrong with you. You will tell yourself that this narcissistic man is not really like that and that you may be missing out on your only chance of being happy.

It is a tactic which he will use again and again. He’ll brainwash you as many times as he wants.

All narcissists love to play this little game. It will appear on your landing, a bouquet in your hand and imploring for your forgiveness.

Then, as a compassionate partner, you will fall for his lies and no one will be able to blame you. No one is as gifted as narcissists in simulating emotions.

They lie so well that maybe, they believe in their own lies for a moment. You will forget everything he did to you and give him another chance because you see yourself growing old by his side.

You will really think that everything that happened to you is behind you. You will think it has changed.

But in reality, narcissists see things from a completely different perspective … As soon as you demand the respect that is due to you, they will try to make up for it by acting like human beings for a few days; just long enough for you to forget what happened before.

As soon as they have “put you back on the right track” (theirs), they will once again become the pernicious beings that they are deep down.

5. “I finally realized that you were the woman of my life”

They will lie to you by telling you that they have had a revelation. They will tell you that suddenly, when they came home from work, they realized that they wanted to spend the rest of their lives with you.

They realized that you were meant to be together. In fact, they want to marry you, and the sooner the better!

It is just ridiculous. It’s one of their many tactics to make sure you miss out on what’s really going on. 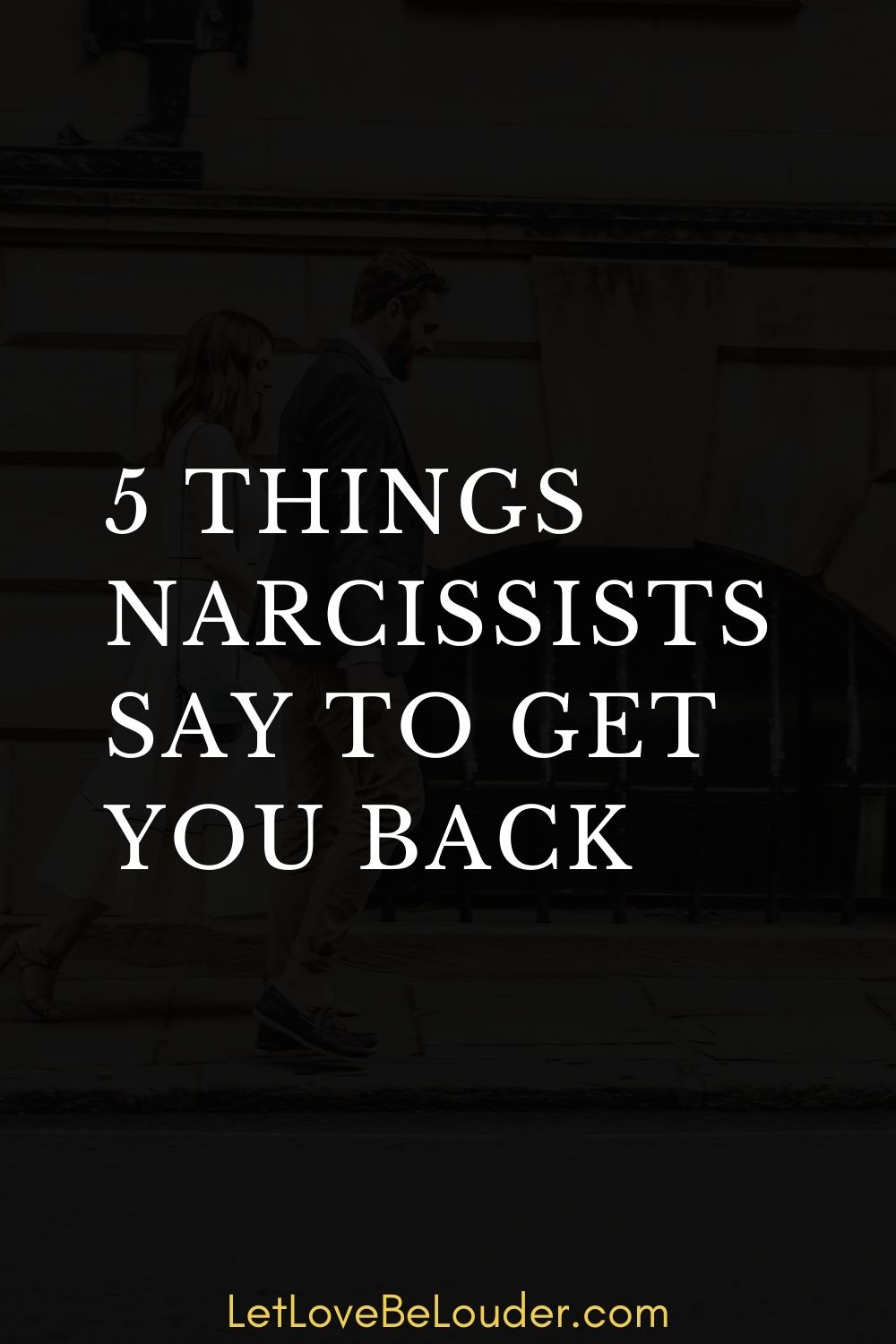