There are many aspects that are necessary in a relationship for it to work.

It’s never just one thing that went wrong when a relationship fails, there are always several factors that have contributed to its failure.

One of these important factors in a relationship is the exchange of messages between you and your partner.

This is how you can learn a lot about your companion, without him having to say much.

When you enter a new relationship, the part where you exchange messages is almost always the most exhilarating part of everything.

Your phones vibrate 24 hours a day, 7 days a week, and you radiate absolutely as soon as you see its number on the screen.

The conversations are endless and you feel like there is nothing he can say that could erase that smile from your face!

But as time goes by, and it gets more and more serious, his messages take a bad turn.

He feels too comfortable because he knows you are completely addicted, and his texting habits are far from what they were in the very beginning.

This is what will tell you if your companion is a real moron, or if it is worth lingering. The way he texts you after he conquers you will reveal his true nature and intentions, you just have to be careful!

Beware of these 7 kinds of text messages that you will receive from him. They are proof that it is really bad for you and that you should drop it as soon as possible!

1. He rejects your emotions and calls you crazy when you want to get rid of a weight that bothers you.

You text him about a problem you have, or something you should be talking about, and totally rejects what you say, feeling no need to think about your idea or suggestion.

It makes you feel like you are acting like a madwoman just wanting to try to get an answer that will not completely ignore your emotions!

You can’t say anything and every time you want to send her a message about something that doesn’t suit her, it makes your stomach ache.

2. He never gives a specific answer to your texts, his answers are always vague.

You want to know more about him and his life, but each time you ask him a specific question, he remains vague.

It’s like he doesn’t want to share deeper things with you and he’s texting you extremely short, which is really hurtful to you.

Whenever you want to take the next step by message, you run into a brick wall that seems completely impenetrable to you.

3. He tends to text you especially late at night.

And you know what that means. If you are in your head only during the night, it almost always means that he is only looking for a sex game.

You tell yourself that it is not, and that it is just a coincidence, but everything indicates that it is so.

You don’t feel like he takes you seriously at all, because if he did, he would text you during the day too.

4. If he texts during the day, it’s mostly when he needs something.

You can’t get rid of the impression that he is using you.

Whenever you see his number on the screen, you know it’s related to sex or that he needs a service.

It’s not that you don’t want to help him, because you want to, but it changes when it looks like that’s what he wants from you every time.

He wants to make believe that there is something more, but the fact is that it suits him to be with you, and that, that really sucks.

5. He only sends messages about him and his own interests.

He rarely asks how you are doing. He rarely texts just to say hello.

He may respond if you text him first, but that’s it.

Most of his texts are about him and his bullshit, and he doesn’t seem to care what is going on with you.

He makes no effort to really experience the ups and downs of your life and you don’t seem to be at the top of his priority list.

He is only interested in himself and the things that happen to him.

6. He’s passive-aggressive on texting about the smallest issues.

He knows what to say to make you feel like shit.

It’s like he wants to pretend he’s not thinking anything wrong, but his texts are almost like designed to slap you.

He just doesn’t care at all about how his crappy texting can affect you, and he doesn’t seem to want to change at all.

If you do something wrong, it will make you feel guilty in such a passive-aggressive way that it would deserve an Oscar for the most dramatic interpretation possible.

7. He takes a hundred years to respond

It almost never responds within an hour of your message.

You know he has his phone on him literally all the time, but every time you text him, even about the little things, it will take a long time to answer.

And even if he miraculously responds within a reasonable time, his response does not usually require feedback.

You do not seem important enough to him for him to consider that your time is also precious and that his habits are nothing but a waste of toxic time.

If it is, it is really bad for you on so many different levels.

A guy like that, he’s bad for almost everyone, so don’t worry about it.

Not all guys are like that, so just let go of it and stop letting it waste your time. You deserve so much better. 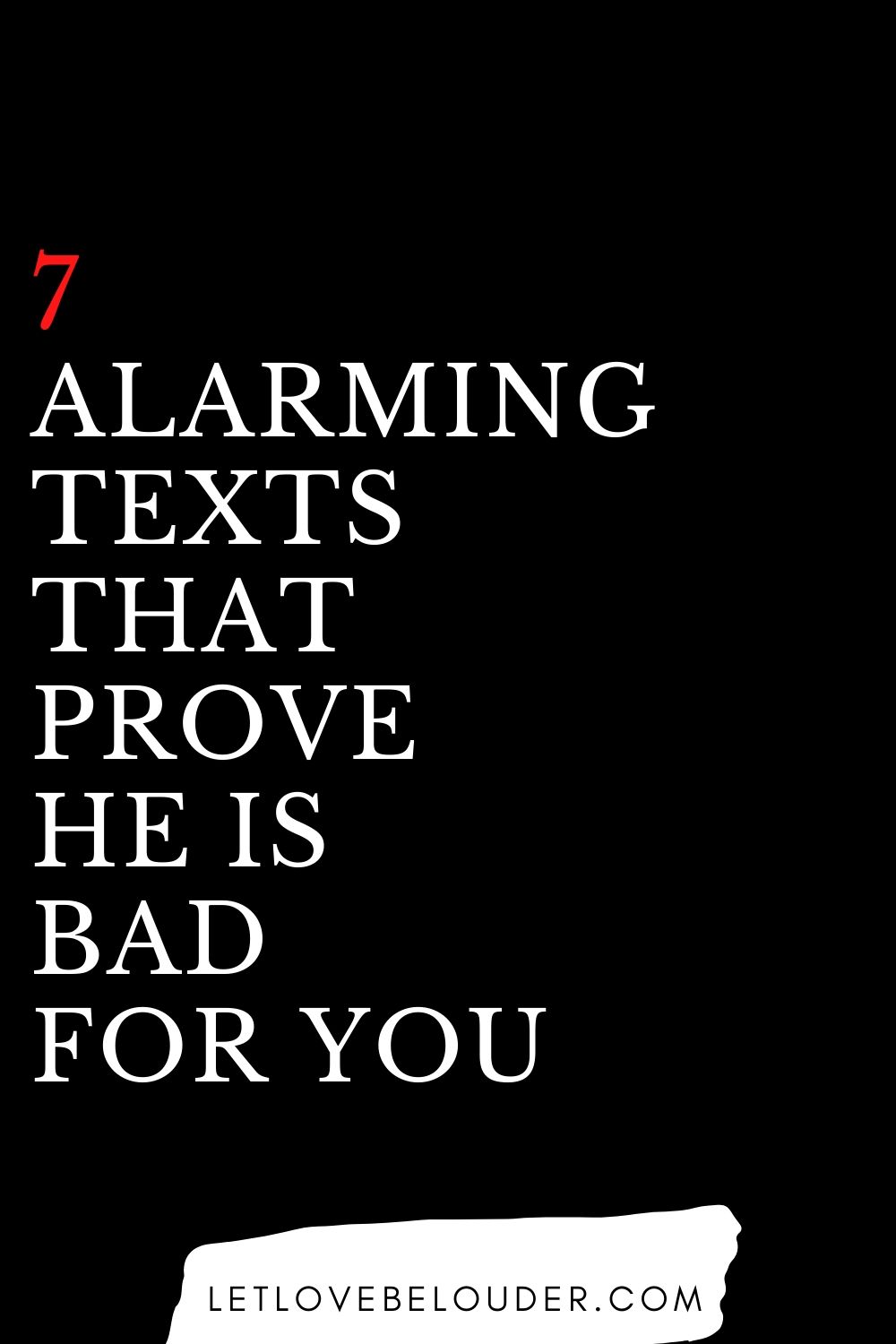