Many of you have been in a relationship with a manipulator or even a narcissistic pervert. It would appear that this represents 5% of men, which seems huge and not very reassuring to me! Even if women are also concerned.

The problem is that it is difficult to detect this personality trait in the other, especially since it often takes a long time to reveal itself. To show his true face. He is a clever pervert, he waits for you to be totally crazy about him to reveal his personality.

For this column, I was largely inspired by speeches by professionals because I am not a psychiatrist! And it’s crazy the number of articles or even specialized sites that exist on the subject, proof that it is a real scourge.

In a few lines, what is a narcissistic pervert?

He is a manipulator and a pervert who feels no compassion or guilt.
He plays with his victims who are only objects for him.

For the narcissistic pervert the other only exists

for what he earns, or he doesn’t exist.

The manipulative pervert wears masks depending on the situation (his family often ignores his true nature). ”

He is a manipulator and a pervert who feels no compassion or guilt.
He plays with his victims who are only objects for him.

For the narcissistic pervert the other only exists

for what he earns, or he doesn’t exist.

The manipulative pervert wears masks depending on the situation (his family often ignores his true nature). ”

– He makes his victim feel guilty by reversing the roles

Arousing a feeling of guilt in his victim is a maneuver in which the narcissistic pervert takes real pleasure. By shifting her responsibility to her target, he pushes her to admit that she alone is responsible for a situation. Discarding one’s wrongs is a specialty of the manipulator.

– He does not communicate clearly, denies the obvious

Impossible to know with exactness his requests, what he needs, his feelings like his opinions. He makes sure that his prey is perpetually trying to understand him.

– Different behavior for each person or situation

The victim can never locate him in the relationship or know who he really is. He is elusive!

– He is armed with logical reasons

Where one request would have received the worst reception with another, the logical reasons he puts forward create acceptance. So often her target finds herself accepting things that she would never normally approve of. The demands are disguised by the relentless logic of its reasoning.

– You must be perfect

Perfection is not an option! So you must know everything and react to its requests promptly.

– He criticizes and devalues

He belittles under the guise of humor at first, then passes judgment on you. It insinuates doubt about your qualities, your skills, and more generally your personality. You become mundane, uninteresting, even extremely inferior.

– He divides the better to rule

The PN pits against each other.

– He positions himself as a victim

Self-elected victim, the narcissistic pervert places himself in this position to be the star. Thus, his entourage sympathizes, pities him, understands him in his trials. He’s the one to turn to and, after all, who could be suspicious of a victim?

He will always respond positively to requests made to him. However, he will then prefer to politely dodge, always claiming a valid reason.

– He uses the moral principles of others

He can fully integrate the way of thinking of a group and its principles by making believe that it is also his own. Being a very weak being, in reality, he has no personality and absorbs that of others!

In both cases, his target must comply with his demands.

– He changes the subject or escapes

To dodge a question that would make him uncomfortable or update him, he changes the subject as if he hadn’t heard the question.

– He relies on the ignorance of others

He uses the credulity of individuals, their ignorance to show them that he is superior, and his need for admiration is finally recognized. He often looks for people in distress.

– He preaches the false to know the true

The main purpose of this strategy is to let him know if he can trust the person he meets. This also makes it possible to test the evolution of the takeover over its prey.

He relates everything to himself in a very natural way, his egocentric nature remains deep. He’s the most beautiful, he’s the best, he wants to be the guru …

– He can be jealous

Be careful, however, because this is not sentimental jealousy in love, but an envious translation! He tries above all to hide it, but his jealousy is expressed towards the capacities which you have and which he does not have. You are its object. So you don’t have the right to supplant him, he’s the best.

– He is obsessed with social image

The positive image that others send of him is capital, not to say vital even, because it is unbearable for him to appear differently.

Your rights, your needs as your desires hold no place for him, although he makes you believe the opposite.

– He has words opposed to his attitudes

When the speech is white, his actions are black! The manipulator’s reactions are the opposite of the attitude corresponding to the speech.

Flattery, outing, a small gift, this person does please you and surrounds you with concern in unexpected ways. In this case, he will have a request to make that will pass for your well-being while acting in his own interest.

– He causes a feeling of non-freedom

A feeling of emotional dependence. You cannot separate yourself from him, even if you know that having him in a relationship is unhealthy.

– Achieves goals at the expense of others

He knows perfectly well how to use others to get what he wants. He is the puppeteer of his entourage.

– He makes you lose your bearings

With it, your mind becomes confused, it turns your brain over. The expression “no longer knowing where you live” takes on its full meaning with him. The term “brainwashing” is apt, as it seeks to mold the other according to their goals. Exacerbated narcissism, he enjoys observing how much he does what he wants with his little mouse.

During phases of denigration, of belittling, it drains you of your energy. It is not to revitalize itself so the term “vampirize” is misused, it is a black hole in fact. The unjustified nature of his attitude drains the energy of his victim who never knows how to deal with the pervert.

– He is very emotionally cold

In the guise of a loving person, he is however devoid of empathy. He shows incredible emotional coldness unless his victim tells him that he is wrong through his fault. In this case, he will do everything to prove that NO.

Always very convincing and deceptive at will, the narcissistic pervert is a pathological liar. He creates diversions, diffuses half-truths, he bluffs, or even threatens his victim when she questions him. He denies the obvious and contradicts himself.

-He is in permanent seduction

Seduction is the lethal weapon of narcissistic perverts. They are good talkers and they are often charming. This seduction is never a two-way street since the PN is never under the spell of its victim. He has a goal in mind and that’s why he approaches then seduces and finally strips the target

He likes to show off his “toys”, namely his wife, his children, his material possessions, his diplomas, in short everything that can allow him to put himself forward in society. He only seeks admiration, attention, flattery, he has a compulsive need for it. nd they no longer fulfill their role, they are thrown away because they are replaceable objects.

-He is seized with sudden anger

We can speak more of attacks of “rage” than of anger. They are totally disproportionate and occur when he does not have his dose of attention, control, and/or submission.

By dint of fooling everyone, the narcissistic perverts build up a solid network of victims who may at one point want revenge. Because of this, they think they are envied, jealous, manipulated, etc.

“I will change”, “I regret”, “I love you, forgive me”, etc. Back to the point on the “pathological liar”. The narcissistic pervert is never sincere and he never questions himself. So when he comes out with such words, you shouldn’t believe anything.

The consequence on his victim? It hurts you

With him you suffer, you are psychologically in pain and do not know how to deal with him. It can even have consequences on your health by a loss. He seems helpful, generous, trustworthy. But all of this is actually FALSE! Right after seeing his victim’s commitment to the relationship, the narcissistic pervert drops the mask, and there, the white knight transforms into an ugly toad. The victim then realizes that she has been fooled, exploited, deceived. In short, the narcissistic pervert is a real fraud. The victim fell in love with her own dreams, the prince charming from the beginning never existed. The abuse is always both financial and emotional because the PN seduces by the feelings then attacks the wallet of the victim before abandoning it to take an interest in his next “soul mate”.

Get help, get therapy if you need to. Read over and over again about this personality disorder, it will help you answer the nagging question “why me?” “. Give up having explanations from your executioner (see the point on the pathological lie).

Do not show him under any circumstances the pain you feel

because that’s what he wants to see!

Here is the horrible secret of the narcissistic pervert:

he is a sadist who sees his full power in your distress.

And don’t forget one thing: he will ALWAYS present himself as Prince Charming on his white horse Too perfect to be honest…. 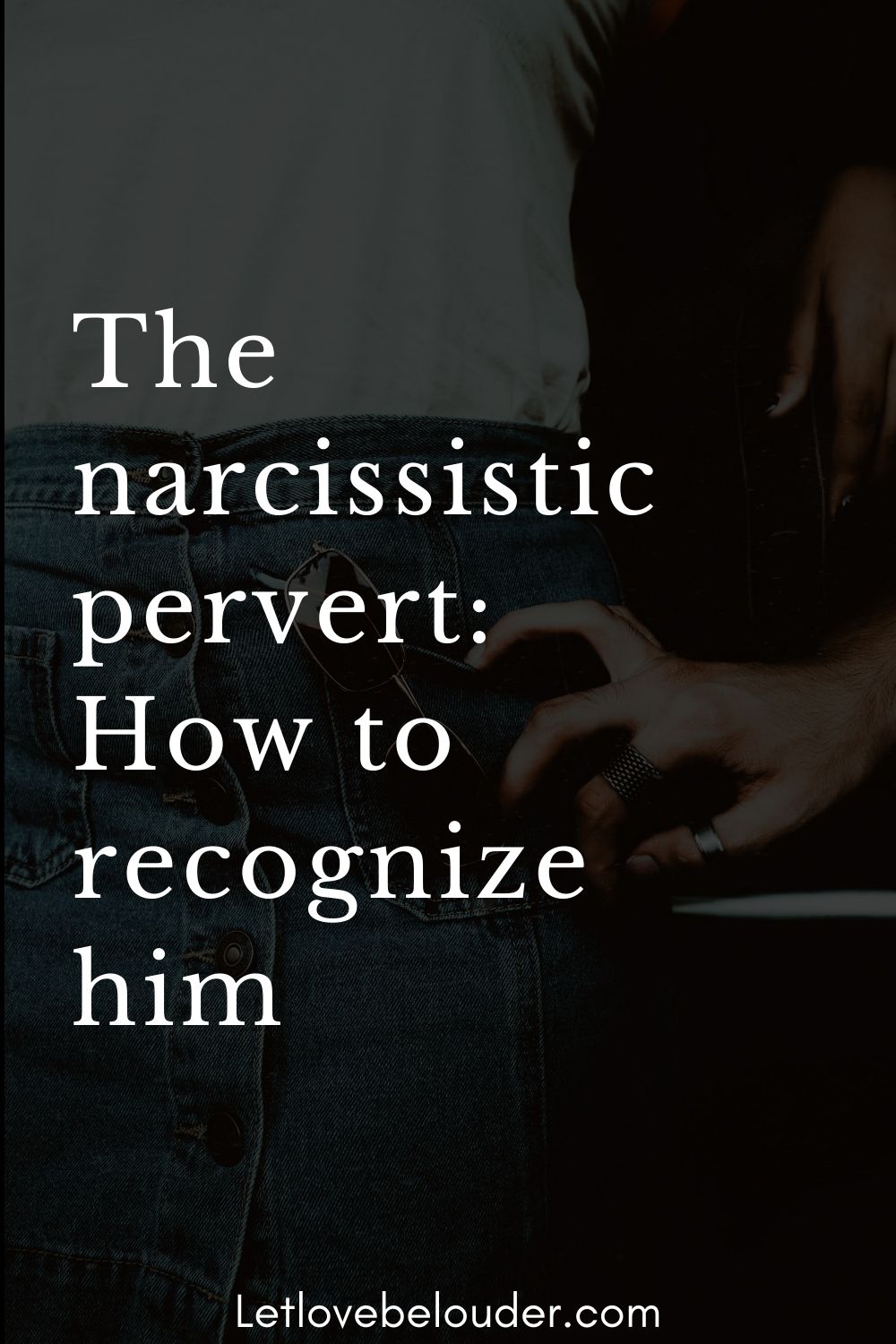